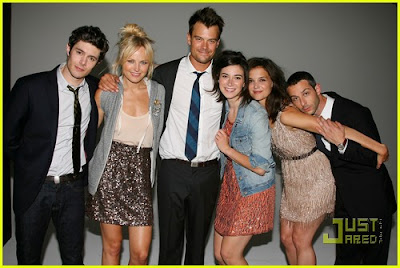 "Thanks!" to many of you, including Lisa, as well as jcrewmommy & AppGal (in this post), who let us know (& shared the following links) that Katie Holmes & Co. are sporting J.Crew's upcoming collection.

The following is an article from InStyle (click here): 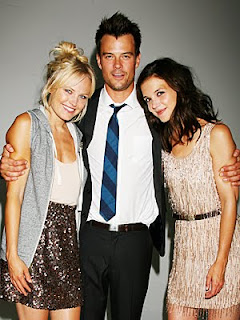 Malin Akerman, Josh Duhamel and Katie Holmes gathered for a photo shoot in N.Y.C. yesterday to promote their new film The Romantics, a rom-com about a group of college friends who reunite for a wedding on Long Island.

Akerman looked quirky cool in a sequined skirt and sleeveless hoodie. Holmes, who plays the maid of honor (and executive produced the film), dazzled in a glittery dusty pink sheath paired with a classic brown belt, while Duhamel looked like he stepped right out of the catalog in a slim suit and preppy striped tie. We’ve confirmed that the cast wears a lot of the label throughout the film (out this summer), and judging by this photo shoot, we can’t wait to see the rest of the film’s fashion!

For more coverage on J.Crew + the Romantics:
Katie Holmes is no stranger to J.Crew. When Dawson's Creek first aired, the cast modeled J.Crew often in their show. As a result, J.Crew decided to use them 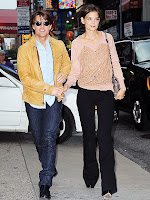 for an entire catalog that was sent to customers back in 1997.

Katie Holmes apparently still loves the J.Crew. "Thanks!" to Lucy, as well as JulieStyles (in this post) & Crewbie, who let us know that she was sporting the Sequin Studio Sweatshirt (Item 26138; $168.00) on her date night with hubby Tom Cruise. For images, click here.

What are your thoughts on the "models"? Do you like how the outfits, featuring J.Crew, are styled? Are you excited to see J.Crew in the new movie?
Posted by Alexis {J.Crew Aficionada} at 7:04 AM