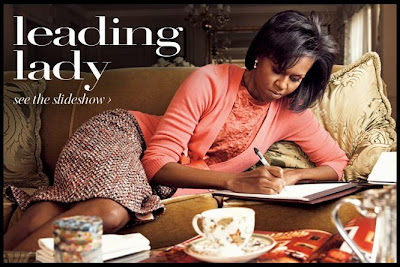 There is an interesting article over at the Big Money (click here) about J.Crew:

There Is No Michelle Effect: J.Crew is having a great year, but that’s got little to do with the first lady.
By Caitlin McDevitt
May 18, 2009

Every time Michelle Obama wears a cardigan, it happens again: a nationwide gush-fest over the way that the first lady is boosting retailer J.Crew (JCG). Michelle Obama Lifts J.Crew! Can Michelle Save the Fashion Retailer? The First Lady Brings J.Crew to London! The Crew Cashes In!

The theory that the first lady has saved the preppy clothing store from a recessionary doomsday fits nicely with the fact that J.Crew stock has doubled in value since the inauguration. Shares have risen from $9.61 per share to $19.23. And TBM for this reason included J.Crew stock in its tongue-in-cheek but successful Obama portfolio.

But is Michelle really the cause here? In a recent research report, courtesy of JPMorgan (JPM), you can find a collection of 10 myths "that along with Easter Bunny," one retail analyst writes, "we're not sure we believe in either." The "Michelle Obama Bounce" is fourth on the list, suggesting that she's had no meaningful impact on the financial standing of the company. In a November earnings conference call, J.Crew CEO Millard Drexler acknowledged Michelle Obama's endorsement as a publicity boon but admitted, "I can't say she drove plus comps," meaning any increase in sales at stores. Her name wasn't mentioned at all in the most recent earnings call in March.

Indeed, it may well be that J.Crew has done more for Michelle Obama than she has done for J.Crew. By wearing the retailer's reasonably priced clothes every now and then, she has convinced American women that she understands them—an invaluable reputation in a recession. While J.Crew is undoubtedly pleased with the free publicity and occasional single-item sales bumps that she provides, the retailer would be doing just fine without her.

So, if it's not Michelle, what has kept the company afloat? There are a few likely explanations. For one thing, the retailer is cutting back. In February, it eliminated 95 positions, stopped matching contributions to 401(k) plans, and sacked merit-based wage increases. Another reason for stability: J.Crew isn't anchored to the sinking shopping mall: Approximately 30 percent of sales come through its catalog and Web site, jcrew.com. Such sales not only offer higher margins, but they can pick up the slack for weak mall traffic. Also, according to analyst estimates, 20 percent of J. Crew's sales come from its outlets, which offer markdowns that are especially appealing in a downturn. And, in its standard stores, it has lowered price points for popular items like ballet flats and jeans.

However, unlike other retailers, J.Crew hasn't had to dramatically slash prices to keep sales up. There are some new customers who think of J.Crew as a bargain anyway: those shoppers trading down from ultra-expensive luxury brands. Like suddenly cost-conscious hedge fund wives, says Tatiana Boncompagni, author of the recently released book titled, well, Hedge Fund Wives. "Most of the women I know whose husbands or boyfriends work in the industry have become sudden acolytes of internet shopping and J.Crew," she writes. The arrival of the well-heeled has not gone unnoticed by the company. "There's a big migration going on," Drexler told shareholders in November.

Not everyone would agree that J.Crew is affordable, but that reputation has been its key to surviving the retail sector's toughest stretch in decades. And it's also what makes Michelle Obama's association with the brand so sticky, despite the fact that she has worn J.Crew only a handful of times since the inauguration. "It's quite special that women readily have access to very same clothes the First Lady of the United States wears," says Mary Tomer, creator of Mrs. O, a blog that tracks outfits worn by Michelle Obama.

Even if it's overblown, her endorsement will be milked by J.Crew for whatever it may be worth. The company created a landing page breaking down the elements of the outfit Michelle wore on The Tonight Show and another after she wore J.Crew in a Vogue photo shoot. The retailer has also purchased Google ads linking to jcrew.com that appear alongside searches for "Michelle Obama."

Still, it seems that the frenzy to buy the items she has worn fizzles quickly. Either the items sell out almost immediately or they linger on the Web site and lose their appeal. Two pieces she has recently worn, a yellow argyle cardigan and the same sweater in purple, have been demoted to the sale section on jcrew.com. As for the rest of the Obama family, J.Crew is making sure that the publicity they've provided isn't as short-lived. The retailer has only recently begun to take orders for the pink and blue J.Crew coats that Sasha and Malia Obama wore to the inauguration four months ago. As for the silken white bow tie that the President wore that night, J.Crew won't put that up for sale until September.

The author, Caitlin McDevitt, contacted me about this article, looking for a few of the items Michelle Obama wore that are still available at J.Crew. [I ended up suggesting the Featherweight Cashmere Argyle Cardigan (Item 11507; was $188.00, now $99.99) in silver olive salt & lavender stone salt-- And I am happy to see she was able to incorporate them into her story.] The article is very interesting in that J.Crew helped First Lady Michelle Obama as much as she helped the firm. :)

What are your thoughts on the article? Disagree or agree with any of the points made?
Posted by Alexis {J.Crew Aficionada} at 6:37 PM