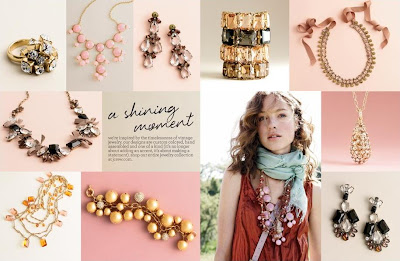 "Thanks!" to RatsOnParade (in this post) who let us know about an an interesting article over at the Wall Street Journal (click here) that mentions J.Crew.

Clothing retailers are expanding their collections of belts, bangles and bags in hopes these high-margin accessories will boost slumping sales.

Casual wear retailer J.Crew Group Inc. opened its first accessories boutique last month in New York and soon will release its third accessories catalog. Accessories accounted for about $165 million, or 12% of its sales last year, almost double the amount in 2004.

Gap Inc. launched the first accessories-only branch of Banana Republic, called Edition, in May. And Henri Bendel, part of the Limited Brands Inc. portfolio, is expanding its offerings this summer with six more stand-alone accessories stores.

Retailers said jewelry, belts and scarves remain impulse-purchases that don't require a lot of budgeting, unlike a new wardrobe. "It's a little bit of a candy moment," says Jenna Lyons, J.Crew's creative director. "You don't have to try it on. You can just take it to the cash register."

Jewelry and bags can yield as much as double the 40% profit margins of apparel, though both vary greatly. The goods take up less space and have more of a timeless appeal, which helps retailers avoid the types of costly markdowns that have hurt results this year. Ed Bucciarelli, chief executive of Limited's Henri Bendel unit, describes the category as "season-less...which obviously speaks to the profit."

And sales are still growing. Women's accessory sales by units for the three months ended April 30 were up 2% from a year earlier, according to market-research firm NPD Group. Women's jewelry-item sales were up 5%, and men's and women's watches and sunglasses were up 11% and 5%, respectively. By contrast, women's apparel sales in units were down about 5.6%.

I am delighted to hear that there will be another accessories catalog from J.Crew- they always do an amazing job with styling and layering. As for the jewelry itself- I like it for the most part. There are some really lovely items. One of my all time favorite pieces is the Golden Bird's-Nest Ring (Item 11171; $65.00), which I get compliments on every time I wear it. Then there are some other pieces that I can't believe made it past production (for example, refer to "Questionable Item of the Week: Atomic Flower Necklace"). Also, like many of you- I am in love with their Collection Handbags (especially the Jaime, the Sean, & the Frankie!)

What are your thoughts on J.Crew's jewelry and accessories now that the category has been around for awhile? Has your opinion (in terms of style, quality, price, and the like) change over the years?
Posted by Alexis {J.Crew Aficionada} at 12:15 AM