Is It An Ugly Time For Madewell? {yeah it is!} 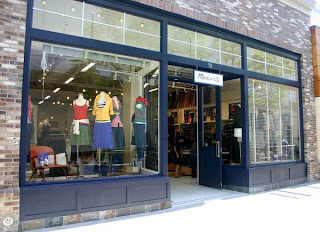 There is another interesting article over at Washington Post (click here to read the article in its entirety) about J.Crew's sister store Madewell and their issues to get customers shopping.

But now their fledgling concepts are struggling in the face of the worst recession in decades. At best, they have become distractions to the companies' already embattled management. At worst, they are a drain on earnings -- and some are shutting down altogether.

"It's hard enough for new brands to gain traction in a new environment let alone in the worst recession in decades," said Todd Slater, an analyst with Lazard Capital Markets. "In downturns, many new initiatives are sidelined."

Last month, Abercrombie announced it will close its 29 Ruehl stores, including one in Tysons Corner Center. ...Some analysts wonder if American Eagle will pull the plug on Martin + Osa. And J.Crew executives have admitted missteps in fashion and pricing at Madewell.

Retailers are under enormous pressure to reinvigorate sales and slash costs. June sales at stores open at least a year -- a key industry measure of health -- dropped 4.7 percent compared with last year, according to data released yesterday. Specialty retailers took one of the biggest hits...

During flush economic times, retailers embraced new concepts as a way to increase sales. Many chains had already saturated shopping centers with new stores, so if they wanted to win new customers, they had to create new concepts for them to shop. ...

J.Crew chief executive Millard S. Drexler has acknowledged that clothing at its Madewell spinoff was too basic and expensive, particularly the jeans. The concept is costing the company about $15 million this fiscal year and it lost about $11 million last year, according to Needham analyst Christine Chen.

In a recent conference call with investors, Drexler said that when plans for Madewell were drawn up three years ago, the company decided to start denim at $98 -- and shoppers balked. Now the cheapest jeans are $59.50.

"So frankly, in hindsight, a mistake," Drexler told investors. "The world is kind of changed dramatically in that regard."

Bringing a new concept to profitability requires a large investment. The rule of thumb, Tunick said, requires 80 to 100 stores ringing up $400 in sales per square foot to break even. Closing a concept now doesn't always mean it was doomed to failure. Few predicted the consumer meltdown that occurred last fall. ...

When I first heard of Madewell, I thought it was going to be full of hip & basic items, offered at cheaper prices than J.Crew. When I saw the items Madewell was offering, I thought that it was just targeted at a younger demographic (high school, college), with similar price points to J.Crew. Their prices always seemed way too high for me (considering its quality, and comparing it to J.Crew's own items). So it comes as no surprise to me that consumers "balked" at jeans starting at $98!

What does surprise me is that Madewell is still around. It's clear that this is J.Crew's CEO Mickey Drexler's baby- and he wants to see it succeed. (And as an investor, owning J.Crew stock, I want to see it succeed too!) However, how long will J.Crew support Madewell's if its not being profitable- another year?

What are your thoughts on the article? Disagree or agree with any of the points made? Do you think Madewell is going to stick around for awhile? What do you think the fate of Madewell's will be a year or two from now?
Posted by Alexis {J.Crew Aficionada} at 12:10 AM