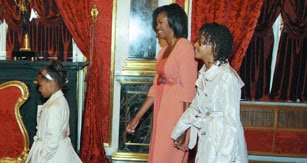 "Thanks!" to Lil Miss JCrew (in this post) & Connor who shared the following article from Politico 44 (click here):

J.Crew is using Sasha and Malia Obama to market some of its spring and summer styles, in a press release sent to reporters Monday afternoon titled "The Obama Girls Bring Some American Style to Moscow."

"Malia & Sasha wore J.Crew and Crewcuts as they exited Air Fore One in Moscow — stylish in their trenches, they also accessorized with ballet flat shoes," the release says.

The notice includes two photographs of Sasha and Malia deplaning Air Force One with their parents and an image of the J.Crew logo.

It also offers details about the specific items each of the Obama daughters wore on the way to Moscow and after their arrival, including the prices and style numbers for each piece.

In the past, first lady Michelle Obama has publicly credited J.Crew a number of times for designing her duds, including the yellow sweater-set and skirt she famously wore on “The Tonight Show With Jay Leno” during the campaign. And the company took credit for creating the coats and gloves the first daughters wore during the Inauguration.

The press release marks one of the few times the Obama girls, whose public appearances the president and first lady keep tightly controlled, have been highlighted in a marketing campaign to sell specific products or labels.

Earlier this year, the first lady smacked down the company that makes Beanie Babies for modeling two new dolls after her daughters: Sweet Sasha and Marvelous Malia.

"We believe it is inappropriate to use young, private citizens for marketing purposes," Michelle Obama's spokeswoman said in a statement at the time, and the company pulled them from the shelves.

The first lady's office did not immediately respond to an e-mail asking if Michelle Obama had approved the marketing materials. Heather Lynch McAuliffe, the vice president of J.Crew public relations, said the White House did not approve the release before she sent it.

The first family is traveling abroad this week, as President Barack Obama meets with leaders in Russia, at the G-8 Summit in Italy and then in Ghana.

Moscow is the first stop, and according to J.Crew, Sasha and Malia Obama dressed for the occasion as follows: