Retailers Are Okay This Holiday Season

There is an article over at Advertising Age (click here) that discusses holiday sales this year, while mentioning J.Crew.

Retailers Get Some Good News on Early Holiday Sales Forecasts
But Comparisons Are Easy With Disastrous 2008; More Data Expected in January
By Natalie Zmuda
December 28, 2009 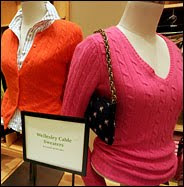 Early estimates from one analyst group indicate that retailers may have escaped a year of disastrous holiday sales -- not that besting 2008 is any huge feat.

MasterCard Advisors tentatively estimates retail sales increased 3.6% between Nov. 1 and Dec. 24. But there is still plenty of reason for caution; accounting for an extra shopping day this year over last year could drag that figure down between 2% and 4%, the group said.

The National Retail Federation, meanwhile, is sticking by a lot less bullish forecast, a 1% decline for November and December, or $438 billion in 2009 holiday sales. Even so, that's a better performance than 2008, when holiday sales slid 3.4% to $442 billion compared to $458 billion for the same period in 2007. Forecasts for this year ranged from a 1% decrease in sales to a 1% increase in sales.

"Knowing how important the week [after Christmas] is, we think it's a bit premature to say how the holiday season has fared," said Kathy Grannis, a spokeswoman with the NRF. The industry group added that "we're still not seeing consumers splurge like we did two years ago."

MasterCard Advisors also reported positive growth in six out of 10 areas tracked between Nov. 1 and Dec. 24. E-commerce sales rose 15.5%, while sales since Black Friday were up 18%. Since Nov. 1, apparel sales declined 0.4%, electronics rose 5.9% and jewelry rose 5.6%, according to the group.

Patricia Edwards, a retail analyst and founder of Storehouse Partners, expressed surprise at some of the numbers reported by MasterCard, particularly the increase in jewelry, which saw steep double-digit declines a year ago. "January 7 is going to be very interesting to see the real numbers," she said.

Regardless, retailers should be given credit for better managing a tough holiday season with well-planned inventories and more strategic promotions. Margins and earnings will certainly be stronger than they were a year ago, as a result, said Ms. Edwards.

Tight inventories could present some issues for retailers in the important weeks after Christmas, however, when consumers are redeeming gift cards. Retail analyst Jennifer Black observed empty shelves at J.Crew stores after Christmas. And Ms. Edwards noted an early shift to spring transitional goods in stores such as Chico's and J.Jill, as well as a lack of some holiday decorations even before Christmas.

"Inventories were so lean that people expecting to go in and get the wrapping paper and decorations for next year didn't find anything," she said. "So, how did you bring people in on Dec. 26 and Dec. 27? ... The market is supposed to be forecasting the future and everyone is getting euphoric about what just happened. I don't want to be a wet blanket, because this shows us the customer is not dead, however, they're not out of the hospital yet."

It's no surprise that retailers were limiting inventory levels this holiday season in response to last year's overabundance of product & merchandise. However, I wasn't expecting to see such lean inventories! I stopped by a Target (or "Tar-jay" as some like to say) store this morning and practically all the holiday merchandise was gone. (The amount left is what I expected to see after two weeks post-holiday, not three days post-holiday.)

As for J.Crew stores with "empty shelves", several JCAs confirmed this in various posts. They mentioned that their local J.Crew brick & mortar (B&M) stores had very few final sale items left. Although on a bright note, several JCAs have mentioned that this week (if not today), J.Crew is introducing its 2010 Resort Collection.

What are your thoughts on the article? Do you disagree or agree with any of the points made? Did you notice retailers carrying fewer items this year?
Posted by Alexis {J.Crew Aficionada} at 12:00 AM