J.Crew has announced its third quarter fiscal 2009 results. It is summed up quite nicely over at the Wall Street Journal (click here). 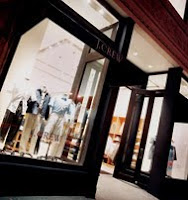 The retail industry has been hit by a sharp contraction in consumer spending and J.Crew, like its competitors, has spent the last year cutting costs, including reducing inventory, and trimming some corporate office positions. But the company's casual styles have been widely copied and creative director Jenna Lyons' design aesthetic has been credited for J.Crew's recent success.

Last month, Pali Research said the chain is well-positioned to increase market share as it courts luxury trade-down consumers, adding its "unique product at compelling price points is increasingly sought out by customers that are increasingly price and value conscious." The firm also touted the differentiated fashion and lower price points of J.Crew's growing Madewell division.

For the quarter ended Oct. 31, J.Crew reported a profit of $43.9 million, or 67 cents a share, up from $19 million, or 30 cents a share, a year earlier. Last month, the company drastically lifted its earnings projection to 54 cents to 59 cents, citing stronger-than-expected sales and margins.

Retail and factory sales were up 20%, and direct sales increased 4%. Same-store sales jumped 8%, in line with the company's October estimate. Inventory per square foot was down 17% from a year ago. For the fiscal fourth quarter, the company expects earnings of 37 cents to 42 cents, while analysts were looking for 41 cents.

"Regardless of the economic environment our long-term mission does not change--it's all about product, it's about design, it's about service, it's about creativity," said Chairman and Chief Executive Millard Drexler.

I am pleasantly pleased with the results. (Especially since I am a stock holder. Go J.Crew, go!) J.Crew's strategy to reduce inventory and keep price reductions at a minimum seem to be working quite well for them.

What are your thoughts on the news? Do you disagree or agree with J.Crew's strategy? Do you think Jenna Lyon's role has helped contribute to the success of J.Crew?
Posted by Alexis {J.Crew Aficionada} at 12:00 AM