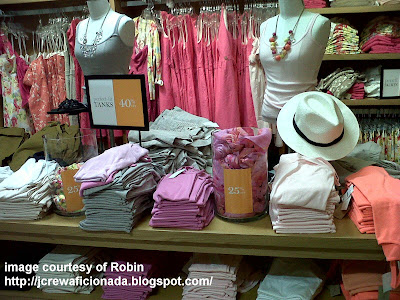 A big "thanks!" to RatsOnParade (in this post) who shared the following news from the Daily Finance (click here to read in its entirety). Also, "thanks!" to an Anonymous JCA who confirmed that J.Crew outlet online will arrive sometime between mid-to-late September!

J.Crew Group Inc. (JCG) plans to let customers buy its outlet-store clothing online starting next month, making it easier to get its low-cost clothes at a time when consumers are counting every penny.

Clothing companies typically place outlet stores in out-of-the-way malls, forcing customers to drive long distances in search of a bargain. Now, J.Crew is hoping that it can tap this demand for bargains without undermining sales at its main stores.

Customers are "deferring, they're waiting, they're comparison-shopping, and people are a little nervous," CEO Millard Drexler said, according to The Wall Street Journal.

Online and outlet sales have both seen strong growth even in a weak economy. J.Crew's profit almost doubled in the quarter ending July 31, hitting $34.9 million, from $18.6 million a year earlier.

I remember a few holiday seasons back (maybe 5 years ago???), J.Crew offered a J.Crew Outlet website. However, it was for a limited time and just items on sale.

It will be great to see all the merchandise available at outlet online. Especially since the outlets may not be easily accessible for some of their shoppers.

Hopefully J.Crew could do something like Gap Inc. does, and combine shipping across the various online stores of theirs (J.Crew, Madewell, J.Crew Outlet).

What are your thoughts about J.Crew Factory coming online? Do you think it is a good move for them? Would you visit the site?
Posted by Alexis {J.Crew Aficionada} at 8:30 AM