Oh Mickey, You Are Something! ;)

Bloomberg has an article on J.Crew's CEO Mickey Drexler and the recent buyout of J.Crew (click here to read in its entirety): 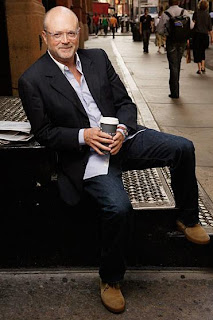 J.Crew Group Inc. Chief Executive Officer Millard Drexler said he wouldn’t change any of his behavior leading up to the sale of the retailer last month, after his conduct prompted investor lawsuits and criticism.

“I would do it the same way,” Drexler said in an interview for “InBusiness with Margaret Brennan,” which will air today. “I sleep well at night.”

J.Crew shareholders on March 1 voted in favor of a takeover by TPG Capital and Leonard Green & Partners LP, which offered $43.50 a share in November, valuing New York-based J.Crew at about $3 billion. The deal came after some investors sued Drexler, 66, accusing him of diluting the offer price by refusing to work with anyone but Fort Worth, Texas-based TPG, blocking other suitors from sweeping in with a better price.

J.Crew, which more than doubled its revenue since Drexler came from Gap Inc. (GPS) in 2003, now plans to expand outside the U.S. for the first time to boost sales. The chain, which operates more than 300 locations in the U.S., will open its first international store this summer in Canada.

“We’re looking at international, frankly, because the demand is there,” Drexler said. “We are an American brand, but I find most brands today are actually worldwide.”

The CEO also said the retailer is expanding its men’s business because it is “exceeding our plans.” J.Crew has about six men’s stores, he said. With the sale, J.Crew is becoming a private company that will make running the retailer easier, Drexler said. Before the deal, the retailer reduced its profit forecast at least twice in 2010, and Drexler had to explain the reasons for that to analysts and investors. With a private company, now he can focus on the long-term goals, he said.

...Drexler, 66, signed another employment contract with J.Crew that will keep him with the company until age 70, and he said he’s working on a succession plan of his own. Jenna Lyons, J.Crew’s president and creative director, could be a potential successor. “How could you say no, right,” he said.

What, what, what are you thinking Mickey? Let me begin by stating that I really like Mickey Drexler. However, his deal for J.Crew to go private was s-h-a-d-y. Shady. So for him to say that he regrets nothing and sleeps well at night, is a bit upsetting. In the end he got a great payday (& job security), but did the shareholders? When I first heard about the shenanigans surrounding the deal, I immediately sold my shares of J.Crew stock.

Onto better news... J.Crew going international! We have been hearing that J.Crew would move into Canada for awhile. Let's make this happen!

Let's talk succession... Could Jenna Lyons be the next CEO? She certainly is being groomed for the position. Interesting!


Mini-Update: There is a great video of Mickey Drexler being interviewed over at Bloomberg TV's InBusiness with Margaret Brennan. Interesting quotes:

On retail performance in an economic downturn:
"It's not the high tide right now. Although I looked at some of the numbers recently and there will be companies that always do well. And the companies that do well, by the way, I think are the ones that dominate categories. If you do it best, over the long term, you're going to drive more traffic to your business because they're going to find the best quality products in those categories. So when I mentioned the categories, it's just not put all the goods out there and hope for the best because a lot of people put the goods out there. And when we have a rough season, and we put the goods out, and we have a lot of markdowns. More and more markdowns drive people away from regular price in theory. That's why the investment aspect is so critical."

On international expansion of J. Crew:
"We're looking at international frankly, because the demand is there…We are an American brand, but I find most brands today are actually worldwide…We go to Canada in the fall. But we're looking at an online [business] actually even sooner than even with bricks and mortar because our online business is our most profitable business. And we just have huge demand overseas. So we're not running. We're walking, we're studying right now. But we launch the U.K. I think in August or September. That's kind of our official online international. Although we are in Japan left over from a deal we had. So we're starting to emphasize the Japanese too."

What are your thoughts on the article? Do you think Mickey has anything to regret for his moves to make J.Crew private? Are you excited about J.Crew's arrival to Canada & UK?
Posted by Alexis {J.Crew Aficionada} at 8:34 AM