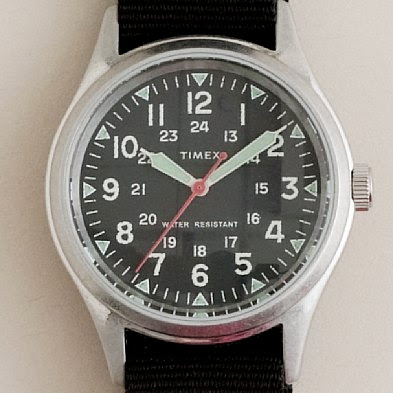 "Thanks!" to Wm who shared the following fascinating article about J.Crew's Timex Military Watch (Item 10884; $150.00) from Hodinkee (click here to read in its entirety, with lots of close up images):

The History of the REAL Timex Military Watch: Plastic, Disposable, And A Product Of The 1980s
By Hodinkee.com
April 20, 2011

Something about the J.Crew / Timex military watch never really jived with us. They claimed it was designed after a watch built to military specifications in the 1940s, but we could never actually find that watch. Even when we went into the vault at Timex, we saw watches from the 1940s, but they didn't look anything like the modern interpretation that we see so often on the wrists of the young menswear set. So, we went on a mission to discover where this design came from, and when, if ever, Timex had a military contract to make wristwatches. We found the watch that inspired the J.Crew piece, but we came to realize that it wasn't from the 1940s at all, but rather from the first half of 1982. And the story doesn't end there. ...

...The Timex Mil-Spec W-46374B is totally fascinating timepiece. It was produced for a questionably short period of time to standards that destined it to be a true "throw away" watch. Yet, the one true Timex military watch has reached grail status to those enraptured with the brand, and certainly those who have a proclivity towards American military pieces. It is, also, the true inspiration for the J.Crew / Timex watch, but we suppose the 1940s just sounded a bit more glamorous than "Two months in the early 80s" to the J.Crew marketing folk. Can't blame em' for that.

First, "kudos!" to the writers of that article who gave such an in-depth history on military watches from Timex.

Second, I think it is pretty darn hysterical that J.Crew's expensive Timex watch was inspired by a cheap 1980's design. Not nearly as funny as me paying full price (minus educator discount, which was allowed back in the day) for it. ;) (What can I say, I really love the watch with its simple design and interchangeable straps.)

Third, I can't help but wonder if J.Crew knew about the true origins of their watch's inspiration. Did they think the 1980's had less of a magical feel to it, then the 1940's?

What are your thoughts on the article? Do you like J.Crew's Timex Watch? Own it? Please share! :)
Posted by Alexis {J.Crew Aficionada} at 12:20 AM