J.Crew Getting Sued Over Design 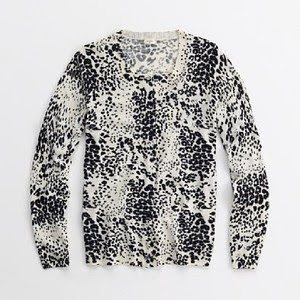 "Thanks!" to many of you, including Jessica & Nicole, who shared the following news: J.Crew is being sued for naming its "Duquette Leopard Print Sweater" after Tony Duquette.

The following story is from WWD (click here to read in its entirety):

A leopard might not be able to change its spots, but an interior design firm believes those spots can be trademarked.

Beverly Hills, Calif.-based TDI, which holds the intellectual property rights of the late designer and artist Tony Duquette, claims in its suit, filed in the Southern District of New York, that J.Crew promoted and sold its women’s “Duquette Leopard Print Sweater” without permission.

The complaint alleges that the plaintiff’s marks are now connected to J.Crew’s product at retail, in advertising and in more than 150,000 online searches from various search engines.

In the Fifties, Duquette began creating and using leopard print designs for fabric, wallpaper, carpet, clothing and furniture. As a result, the print became a “signature theme” of his designs and “still remains such a defining and recurring element” in his history, according to the court papers submitted by TDI.

After Duquette’s death in 1999, business partner and designer Hutton Wilkinson, who is also named as a plaintiff in the suit, took the helm at TDI and has continued to design, license, promote and market the late designer’s work.

“We filed this claim to ensure our trademarks are used appropriately and only with our permission,” said Wilkinson, president and creative director of the firm.

Calls to J.Crew seeking comment were not immediately returned by press time. TDI is looking for injunctive relief, damages, attorneys’ fees and other costs.

The following are additional articles covering this story:
Interesting. It's clear J.Crew wanted to pay tribute to the Duquette name. But did they purposely use the Duquette trademark (and perhaps the print) without permission? That I don't know.

What are your thoughts on this news story? Is a leopard print just a leopard print -or- do you think there is a case of infringement on J.Crew's part here? Please share!
Posted by Alexis {J.Crew Aficionada} at 5:04 PM