A big "thanks!" to Jessica, who shared the following article about Madewell's expansion in NYC from WWD (click here to read in its entirety): 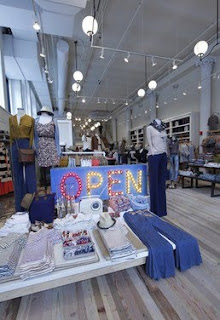 Madewell now has its rightful flagship — a 6,500-square-foot, two-level unit opening today in a landmarked site in Manhattan’s Flatiron neighborhood.

The store, at 115 Fifth Avenue on the southeast corner of 19th Street, represents the largest location in the 22-unit chain, and most architecturally impressive with imposing 19-foot arched windows and Corinthian columns from the original 1816 building that housed the former Arnold Constable department store.

Furthering the historic character is the array of antique mill tables, steamer trunks and steel meat hooks doubling as merchandise fixtures, the exposed ductwork and vintage-inspired ceiling lamps resembling gas lights and some quirky decorative displays like old wind-up clocks and shoe lasts and a Madewell sign created from pushpins. 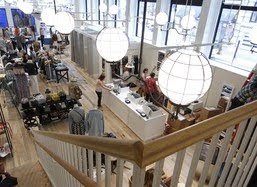 With greater square footage than it typically tackles, Madewell, the less expensive, more casual division of J.Crew Group, stepped out with some new merchandising concepts, including a 300-square-foot shoe shop in the rear of the store; a wider selection of home goods; and a “hometown heroes” pop-up shop on the 2,000-square-foot mezzanine selling items from some of the staff’s favorite stores around town. There’s affordable estate jewelry from Erie Basin located in Red Hook, Brooklyn; pillows from JS & Sons in Nolita, and mechanical pencils and various office supplies from Top Hat on the lower East Side. There are also CDs and vinyl records from Other Music in the East Village; bikes from Bowery Lane Bicycles, and prints from the Jen Bekman's 20x200.com. Madewell’s New York Centricity is most evident in the storefront which currently displays three-dimensional chalk graphics depicting the Empire State Building and Chrysler Building, among other icons. 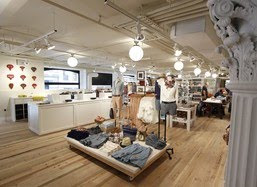 “This space is really open, especially compared to our SoHo unit which is quite narrow. We can capture a lot more color and drama,” said Kin Ying Lee, Madewell’s head designer.

“Madewell is at a pivotal point,” added marketing director Gigi Guerra, who explained that the flagship’s experimental character fits, considering the brand continues to evolve its merchandise and this year is picking up the pace of store openings, with units set for Lincoln Road in Miami on June 7, San Francisco Center in July, as well as the one that opened last month in Costa Mesa, Calif. in South Coast Plaza.

Madewell, which is believed to be moving closer to profitability, debuted in 2007 with a narrower, downtown appeal and now “crosses a lot of boundaries” targeting women ranging from college students to young mothers, though there’s still some of that downtown, hipper side and a tomboyish or “boy-girl” character to many of the clothes, Guerra said. Think slouchy chambray tops and trousers, plaid shirts, desert boots and Le Minor striped French sailor T-shirts.

The store looks a-MA-zing! I cannot wait to check it out over the Summer.

I also find that interesting two things: (1) Madewell is still not profitable after all these years! If it wasn't Mickey Drexler's baby, would Madewell still be around today? (2) Madewell is trying to broaden its appeal now. When Madewell first came out, they targeted affluent teenagers and those in their early twenties. Now, I completely agree they are trying to branch out of their initial age brackets with many of their offerings and styles. However, I wonder if this will change the brand's image.

What are your thoughts on Madewell's new flagship store? Will you be making a visit any time soon? Have you already checked it out? Please share!
Posted by Alexis {J.Crew Aficionada} at 12:20 AM