J.Crew's Men's Suiting {getting some recognition} 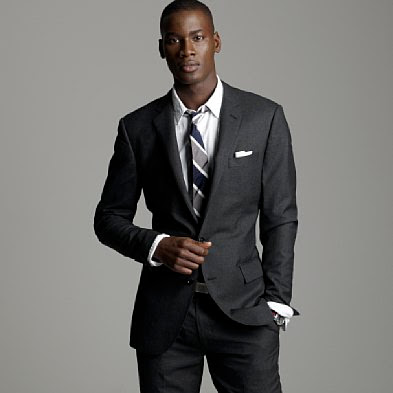 "Thanks!" to J.Crew Guy In Canada who shared an article from Wall Street Journal online (click here to read in its entirety).

It can cost a man a lot less to feel like a million bucks in his suit these days.

There are more suits priced between $500 and $700 that include features once found typically on more expensive suits: fine Italian fabrics, modern cuts and narrow lapels. The goal is to attract younger men who increasingly want the current fitted, formal styles as opposed to the boxy suits and more casual officewear of their dads.

...Other efforts to keep up quality at lower prices include J.Crew Group Inc.'s expanded men's suit selection. Sales of its men's suit have more than doubled since 2008, when the clothing company introduced a slimmer style, made with Italian wool and superior interior construction, a spokeswoman says. The style, called Ludlow, starts at about $600.

...J.Crew, ...controls more aspects of production from design to distribution, cutting out payments to third-party companies that typical move suits into department stores.

...The J.Crew suit fared well with the testers noting its neat construction and that it is made of high-end Italian fabric and Bemberg lining (a type of rayon favored for its breathablity and moisture absorption).

It's great to read that J.Crew's suiting for men holds up very well in terms of quality & value!

What are your thoughts on J.Crew's Men Suiting? Do you own any pieces from the line? If so, please share! :)
Posted by Alexis {J.Crew Aficionada} at 12:05 AM