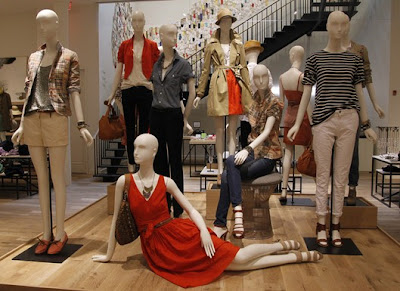 A big "thanks!" to Jessica who shared the following article from WWD (click here to read in its entirety): 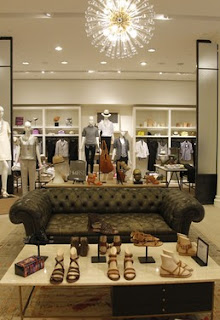 J. Crew’s newly expanded and remodeled flagship at 91 Fifth Avenue here is described by a long list of superlatives. It’s the largest store in the chain, having grown to 20,800 square feet from 15,000 square feet. According to sources, sales are expected to exceed $1,100 to $1,200 a square foot.

The location, near 17th Street, is also J.Crew’s first three-level store and the first to house men’s, women’s and Crewcuts, its children’s brand, under the same roof. (A unit at Garden State Plaza in Paramus, N.J., offers the three businesses, but in adjoining stores with separate entrances.) The flagship boasts the chain’s first proper shoe and handbag departments, and the first men’s and women’s suit areas. It also has the first dedicated area for personal shopping, a lounge with private dressing rooms off the main floor. Home delivery and complementary “house calls” will be coordinated from the store.

With a lighter and more open design, the store’s decor is a nod to a mid-century modern sensibility with art and objects from the Thirties to the Sixties, 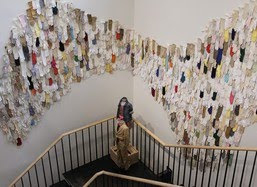 such as Bradley Hughes’ “Lucille” lighting fixtures and a curated art collection. There’s also an installation on the wall of hundreds of gloves that form an abstract bird’s wing and a neon legend behind the cash wrap: “Take Me (I’m Yours)” that could be a Barbara Kruger work. Throughout the store, industrial wire and glass panels are used to frame areas, create alcoves or delineate the entrance to a new department.

“We want to make sure each store speaks to its environment,” said Jenna Lyons, J.Crew’s president and executive creative director. “Each store reflects the neighborhood it’s in. Cookie cutter stores are not creative or conducive to people shopping. There’s a vibe and energy you always feel in any good store.”

“It articulates in a very clear and concise and emotional way what J.Crew is,” said chairman and chief executive officer Millard “Mickey” Drexler, who visited the store on Tuesday afternoon for a walk-through with his team. “It’s about a store that gives the merchandise an environment and connects emotionally with customers. We’ve been able to articulate businesses here that hadn’t presented well [elsewhere]. The store has everything we’ve had but [the store design] makes it easier to see and feel. This has been one of our landmark stores for a long time.” 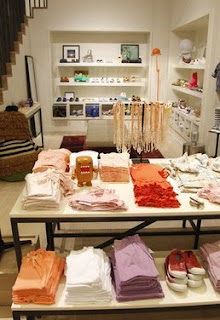 The store, which caters to office workers and residents during the week and is a destination for tourists on weekends, opened in 1996.

Nothing escapes Drexler’s keenly observed eye. During the store visit, he saw something that reinforced the idea that the brand is appealing to more affluent shoppers. “This, I love to see,” he announced in the shoe department. “Chanel shoes on a customer.” Earlier that day, when Drexler stopped by the new Crewcuts department on the second floor, a half-dozen strollers deposited near the entrance caught his attention. “I was on the store loudspeaker saying, ‘We need a stroller parking lot,’” he said.

Drexler chatted up employees and consumers alike, eliciting their opinions on anything and everything. He insisted that some new business ideas come from customers. A shopper recently asked him why J. Crew doesn’t make baby and layette products. “We’re working on it, –ish,” he said. 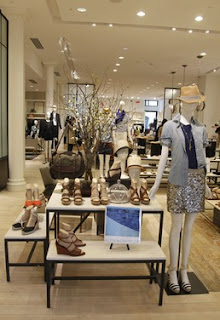 “We’ve always had a very well developed men’s business in this neighborhood,” said Drexler. “We hope it will be even more productive.”

The third floor men’s department was inspired by turn-of-the-century New York City garment factories. There’s oak flooring, a grid of pendant light fixtures and other masculine touches such as portals and transoms made from blackened steel and antique glass wire to define the shops for suiting, denim and shirting. In Good Company third-party partnerships and collaborations include Belstaff for leather bomber jackets and Quoddy of Maine for artisan moccasins, among others.

The store sounds amazing! The next time I am in New York City, I am definitely stopping in!

What are your thoughts on the remodeled Fifth Avenue Store? Do you like how the store looks (from the images)? Will you be planning a visit anytime soon? If so, please share! :)
Posted by Alexis {J.Crew Aficionada} at 10:03 AM