As mentioned in the January 19th "Madewell News: Alexa Chung Collaboration" post, Madewell announced it would team up with Alexa Chung (model and former MTV show host) on a new line of clothes. 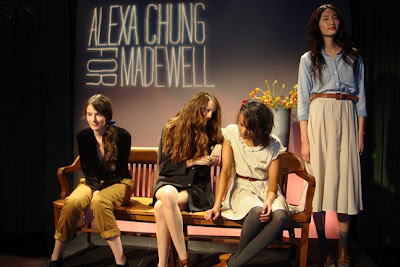 The following is an article from Wall Street Journal (click here) on the debut of this collaboration.

Madewell, the little known sibling to J.Crew, has had somewhat of a rocky start. Since Mickey Drexler launched the brand more than three years ago, sales at its handful of stores have been slow. The denim-based concept is aimed at college-age shoppers, but the brand still doesn’t offer e-commerce on its Web site. The opening price point of its jeans, once starting around $98, had to be brought down to $59.

But the fledgling brand’s buzz factor rose considerably Monday evening with the debut of Madewell’s partnership with Alexa Chung, the model turned television personality who is a fixture on the social scene’s best dressed list.

“What a great way for Madewell to revamp their look and image. How fabulous,” said Christian Siriano, the Project Runway alum who had his own show in Bryant Park this week.

Ms. Chung, a 26-year-old Brit, was most recently the host of MTV’s “It’s On with Alexa Chung,” which was cancelled late last year. The last episode aired in December and, in January, her partnership with Madewell was announced. A friend of Ms. Chung’s who works at the brand helped pair the two up, Ms. Chung said.

Madewell’s “vision is kind of the same as mine. They like laid back styles, they like kind of relaxed clothes — classic, timeless things. So when they asked to collaborate, it was a perfect fit,” she said.

Madewell staged a presentation of the collection at the Bowery Hotel on Manhattan’s Lower East side Monday night. In between photographs and interviews, Ms. Chung snuck in conversations with the models, asking if they were comfortable and giving them sips of her drink.

The clothes were inspired by the 1960s, Ms. Chung said, which was evident in the short shorts and tea dresses. The colors were fairly soft, in tans and blues and grays, with the occasional pop of bright red or black velvet. The models slouched on vintage suitcases and posed near a retro bicycle as oldies including “My Boyfriend’s Back” blared overhead—the soundtrack was courtesy of Chung’s DJ friend Tennessee.

One prevalent style in the Chung-Madewell partnership: socks with sandals, a trend that is cropping up all over fashion week. “Sorry about that,” Ms. Chung said with a laugh, attributing the look to the woman who styled the show. The gray socks worn by many of the models were from the “school boy department” at English retailer John Lewis, Ms. Chung said.

What remains to be seen is if this partnership is a permanent one. “We haven’t really discussed another [collection] yet but it would be amazing to do,” Chung said. “We’ll see how this goes.”

It would be nice to see some additional shots from the event... and here they are:
From the image above, the clothes look okay. From left to right, outfit 1 & 3 look cute. I can see myself wearing either one. :) Outfit 2 is confusing since I can't tell if she is wearing a dress or a sweater jacket with no pants. Outfit 4 is a mess with that high waisted skirt. As for the socks with sandals look... no more, please no more! ;)

What are your thoughts on the article? Do you think it is a good marketing move to have a celebrity collaboration for Madewell? Do you think Alexa Chung's collection is a good fit with Madewell? :)
Posted by Alexis {J.Crew Aficionada} at 8:01 AM