NYT Names Lyons as the "Woman Who Dresses America" 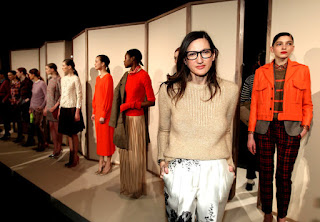 IT’S hard to miss Jenna Lyons. About nine feet tall and slim as a mink, often eccentrically dressed and wearing the boxy, geek-chic eyewear that has become the most identifiable signature in fashion since Anna Wintour’s bob, the 44-year-old executive creative director of J. Crew was an instantly recognizable presence at the many parties, runway shows and red carpet events she attended during 2012.

...“I know what it’s like not to feel beautiful,” she told the audience, which included hundreds of young girls invited by the magazine. “I remember that feeling.” ...

But with fame came a level of intrusiveness... Ms. Lyons concedes that she is not immune to the joys that fame has brought her. “Do I like the attention?” she said over drinks at Locanda Verde, around the corner from the TriBeCa loft where she lives with her 6-year-old son, Beckett. “Well, of course the narcissist in me will say ‘Yes.’ In all honesty, there is nothing more sweet and moving than when someone comes up to me and says: ‘You’re Jenna Lyons, aren’t you? I love J. Crew.’ That is so nice. I love that. It is amazing.” ...

DECEMBER was the 22nd anniversary of Jenna Lyons’s arrival at J. Crew — she has spent exactly half her life there. She started as an assistant designer in men’s wear, fresh out of Parsons, and over the next two decades worked her way to the top. Now, as the company’s president, she oversees every visible part of the company, from the clothes themselves to the look of the stores, the catalogs and the Web site. One might call her today’s answer to Tom Ford, who almost two decades ago undertook the reinvention of another swamped brand, Gucci. ...

That is no understatement. Ms. Lyons does indeed come across as her unvarnished self, whether she is squealing with delight over a sparkly bit of jewelry or crisply reeling off the elements, ideas and merits of a new collection in a business meeting.

When it is suggested that she could be described as equal parts fashion insider and outsider, she scoffed.

“I am totally an outsider,” she said. “I am so not an insider, and that is O.K. I might feel like one in very particular moments. But I don’t feel the same pressure I did when I was young to be part of the club. I’m not one of the cool kids, and that is totally fine.”

THAT sensibility springs from sensitivity. Ms. Lyons grew up in Palos Verdes, Calif., on the coast south of Los Angeles. She was not Malibu Barbie. Her awkward height was compounded by a genetic disorder, incontinentia pigmenti, that scarred her skin and caused her hair to fall out in patches and her teeth to be malformed. (She has worn dentures ever since, she freely pointed out.)

Then, in her seventh grade home economics class, she learned how to sew, and sew she did. It worked better than she could have hoped. The popular girls liked what she made. Style gave her not only armor; it gave her cachet.

Though some people might be eager to leave such ugly-duckling baggage in the past, Ms. Lyons was able to integrate the experience into her look, her work and the philosophy behind J. Crew itself.

“It is not like you have to prescribe to a certain identity or idea to be a part of the brand,” she said, adding that one of the things she and Mr. Drexler bonded over early on was that they didn’t want to see any visible logos on any of the clothes. “I think that has more integrity than something that makes you feel like if you don’t look a certain way, you cannot be part of it. I don’t appreciate that. I grew up not feeling like part of the group, and I hate that feeling and hate making anyone feel that way.” ...

“When I was young and people judged me for things I had no control over, that was really hard, so I’m incredibly open to people doing whatever works for them,” she said. “It’s just as surprising to me as it probably is to everyone else. It certainly is strange to wake up, at 44, and look at the person next to you and think: ‘Oh! This wasn’t what I expected.’ But I don’t think love works that way, and I am O.K. with that.”


It is always a treat to read about J.Crew's Jenna Lyons in the paper! She really does come across as down-to-earth. It is clear she has worked hard to get where she is. Kudos to her!

What are your thoughts on the article? Did you find any of the points particularly interesting?
Posted by Alexis {J.Crew Aficionada} at 12:30 AM