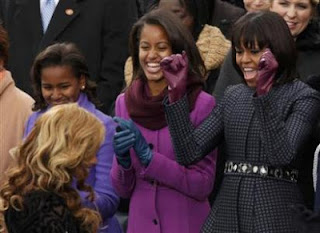 "Thank you!" to so many of you, including Catherine K & Luxette (in this post), as well as Shannon M., who let us know that J.Crew made an appearance at the Inauguration yesterday. The following is an article from Reuters about the debut (click here to read in its entirety):

The first lady wore a navy coat and dress by designer Thom Browne, inspired by the fabric of a man's silk tie.

The belt and gloves were from J.Crew, a mid-priced chain that is a fixture in U.S. shopping malls; the necklace and earrings were designed by Cathy Waterman. The boots were by Reed Krakoff, as was the short blue cardigan she wore to the celebratory lunch in the Capitol hosted by congressional leaders.

"At the end of the inaugural festivities, the outfit and accompanying accessories will go to the National Archives," the first lady's office said.

Dressing any first lady, especially Obama, a Harvard-trained lawyer known for her style, can be a huge boost for a fashion designer or retail chain.

...Interest in Michelle Obama's clothing has extended to the outfits worn by her two daughters. On Monday, the White House said Malia, 14, was wearing a J.Crew ensemble and Sasha, 11, wore a Kate Spade coat and dress. ...

Well, it was nice to see J.Crew's return (refer to January 2009's "J.Crew Attends The Inauguration {wahoo!}" post). The whole family looked absolutely stunning in their outfits. Each outfit looked perfectly polished and put together.

By the way, I could not get over how gorgeous (and tall!) Malia is. (I remember being 14 and going through a terrible awkward phase. One that I am still not 100% convinced I have moved on from.) ;)

Were you excited to spot J.Crew at the Inauguration yesterday? Did you like the pieces?
Posted by Alexis {J.Crew Aficionada} at 7:40 AM