"Thanks!" to Priview who shared the following article from Fashionista (click here to read in its entirety) with us: 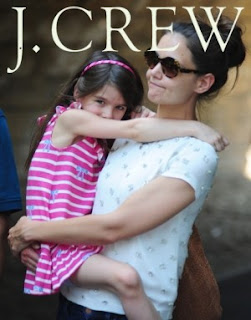 Katie Holmes and Suri Cruise Probably Aren’t the New Faces of J. Crew, But We Think They Should Be
By Dhani Mau
August 3, 2012

Judging by celeb gossip magazines and blogs these days, you’d think Katie Holmes and Suri Cruise were the only celebrities living in Manhattan. Their every move... is recorded, including, apparently, several recent trips to the Columbus Circle J.Crew.

In fact, the adorable mother-daughter pair went to J.Crew so many times in one week (four), it lead WWD to speculate that Holmes might be “trying out for” J.Crew or engaging in some sort of formal relationship with the brand. It’s not so far-fetched, we guess. As they point out, Holmes has fronted the brand twice– first in a catalogue with her fellow Dawson’s Creek co-stars and most recently in an ad campaign with the cast of The Romantics two years ago.

Sadly, Holmes was likely just rounding out Suri’s Crewcuts collection, as a J.Crew spokesperson confirmed to the trade that they were not working with Holmes in any formal capacity. However, that doesn’t mean it’s out of the question, right? She’s no longer fronting J.Crew competitor Ann Taylor and if J.Crew ever decided to sign a celebrity mother-daughter pair for an ad campaign, which we think would be brilliant, we can’t think of anyone more perfect than Katie Holmes and Suri Cruise. They both already wear and represent the brand pretty perfectly if you ask us and it’s nearly incomprehensible that Cruise, at 6 years old, has yet to land a modeling gig. I mean, what is she waiting for?

If modeling is out of the question, why not a Holmes & Yang X J.Crew collab that extends to CrewCuts?

If visiting J.Crew four times a week leads to speculation that someone is the new face of J.Crew, then I must be president! ;) Of course, my technique is a little different. I stop at several J.Crew's in the same day (there are several within a relatively short drive from each other which makes this possible). This helps minimize the stares from store associates, who I know are thinking "oh, it's you again."

But in all seriousness, there is no judgement on this side of the aisle, Katie. We JCAs, we welcome you with open, well-dressed, arms. :)

What are your thoughts on Ms. Holmes many visits to J.Crew? Do you think she should be the face of J.Crew {again}?
Posted by Alexis {J.Crew Aficionada} at 5:14 PM