J.Crew Connecting With Base Through Ads {thoughts?} 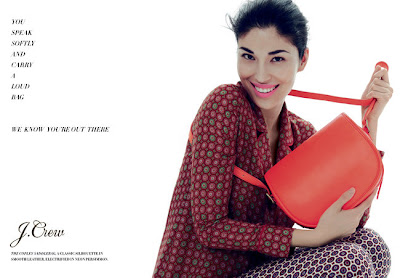 "Thanks!" to many of you, including Jessy & Kelly (in this post), as well as Priview & JM,who shared the following article from the New York Times (click here to read in its entirety) with us:

J.Crew Wants to Reconnect With Its Base
By Elizabeth Olson
August 7, 2012

J.CREW, the popular purveyor of clothing classics, is rolling out a broad new advertising campaign aimed at galvanizing its customers — some of whom call themselves “jcrewaholics” — and also making them smile.

The campaign ads use the line, “We know you are out there,” to appeal to its aficionados along with close-ups of fashion-forward artists, editors and others who, J.Crew says, wear its clothing not only in the ads but also in their daily lives.

“We are speaking to people who appreciate our style, quality and design, and the ads do so in a quirky and clever way,” said Diego Scotti, the company’s chief marketing officer.

One ad, for example, says, “You speak softly and carry a loud bag,” with a crouching young woman carrying a bright persimmon-colored purse and wearing a vividly patterned J.Crew silk blouse and capri pants. Another ad says, “You notice the lapel before the label,” and shows a young man lounging against a wall. He is clad in J.Crew’s ready-made Ludlow suit and wearing its navy suede Alden shoes (no socks).

The campaign will span major print outlets as well as digital and social media, and will be the first time the company, officially known as the J.Crew Group Inc., has embarked on such a wide multimedia marketing initiative.

...“Young adults between ages 25 and 34 are in the career-building stage,” said Mr. Cohen. “They can’t go to work too casually dressed any more. So it’s become more about ‘dress for success,’ which we haven’t seen since the 1980s.”

Yet, like all retailers, J.Crew knows it only takes an economic dip, or a style slip, for sales to decline.

“We are in a moment when we need to tell our story louder,” explained Mr. Scotti. “We are on a mission to elevate our product and customer demand. We have not done much advertising in the past, other than niche magazines.”

The company’s stepped-up effort will expand its presence in publications including Vanity Fair, Vogue, Fast Company and the Sunday New York Times Magazine as well as in social media and online. There are no television commercials.

The company, which has 300 stores in North America, worked with the New York City creative firm, Partners & Spade, on the campaign concept. J.Crew’s in-house marketing team handled execution. The company does not use celebrities in its marketing, but it has basked in the fashion spotlight when its cardigans and other clothing have been worn by the first lady, Michelle Obama. There are also a number of blogs, including jcrewaficionada.com, where loyalists closely follow the company’s apparel and accessories.

The specialty retailer said its advertising budget doubled this year over 2011, but declined to provide a specific figure. Kantar Media, a unit of WPP, said that J. Crew’s outlay was $4.2 million for the three months ending April 28, a major uptick from $524,000 spent in the same period last year. Over all in 2011, according to Kantar figures, the company spent $6.7 million on advertising.

J.Crew still relies on the traditional staple, the paper catalog — now called the Style Guide — to reach customers. Last year, it sent out some 40 million copies.

Its catalogs, which began in 1983, showcased its popular classic clothing styles like the rollneck sweater, created by Emily Cinader Woods, a daughter of the company’s founder and the person most responsible for what became the J.Crew look. Six years later, the company opened its first retail store, at New York’s South Street Seaport. In 1996, it started its Web site and a year later the company was sold to the Texas Pacific Group.

As its new campaign unfurls, J.Crew is continuing to expand its selection of handbags and shoes, emphasizing the quality and origin of the materials it uses. The Ludlow ad, for example, explains that the men’s suit is made from “worsted wool, woven in hand-selected yarn spun in Italy at the Lanificio di Tollegno Mill (est. 1862)” — details, Mr. Scotti said, that underscore the “authenticity and integrity” of J.Crew’s offerings.

“We are aiming at people who have the mind-set that values quality at a reasonable price,” he said.

Well this article is timely- as it ties in quite nicely with yesterday's "J.Crew's Worldwide Style {video time!}" post.

So many things to touch on so I will bullet list it:
What are your thoughts on the article? Do you think J.Crew is reaching out the J.Crew Aficionados and Aficionadas out here?
Posted by Alexis {J.Crew Aficionada} at 2:14 PM