Manolo Blahnik for J.Crew {not happening!} 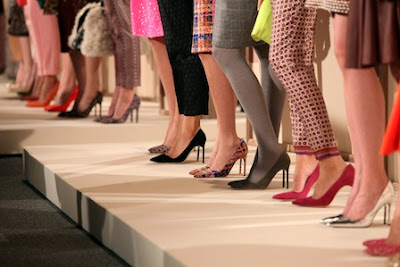 Back in February, in the "Manolo Blahnik Did Not Know About J. Crew Collaboration" post, we learned that Manolo Blahnik was not aware about their collaboration with J.Crew. "Thanks!" to Angela, who let us know about an article over at Fashionista (click here to read) with the latest on the Manolo Blahnik for J.Crew Collection:

That Manolo Blahnik for J. Crew Collaboration Is Not Happening After All
By Hayley Phelan
April 26, 2012

Well this is a disappointment. Turns out that Manolo Blahnik for J.Crew collaboration, revealed at the brand’s fall presentation during New York fashion week, is not happening after all.

You’ll recall that Manolo Blahnik reportedly had no knowledge of the collaboration. Still, following that revelation, Jenna Lyons later told The Daily, “We are in a good place with [Manolo Blahnik] now. Everything’s OK,” both parties have decided not to move forward with the project “due to wholesale production restraints on [Manolo Blahnik's] end,” a spokesperson for the shoe company told us. In other words, you better take a good look at those pretty stilettos in the above image because you may never get to put them on your pretty little feet…or at least not anytime soon.

“We were looking forward to the potential collaboration between our two brands, we both came to the conclusion that fall wasn’t the right time,” Manolo Blahnik’s president George Malkemus told us. “We hope to do something together in the future.”

Lyons and her team, who were “a joy to work with” according to a Manolo Blahnik rep, released a statement with a similar sentiment: “We have a mutual admiration for each other and while we couldn’t do this for fall, we hope to collaborate in the future.” Dear (shoe) gods, we hope so too.

The cynic in me doubts there was ever a shoe collaboration between the two in the first place. I think there was a lot of miscommunication and misunderstanding that caused the initial announcement in the first place, and why it never moved forward.
Are you sad that the Manolo Blahnik for J.Crew Collection will not be materializing? Do you think they will move forward with one in the "future"? What are your thoughts on this newest development?
Posted by Alexis {J.Crew Aficionada} at 4:35 PM