'There Are Too Many Retailers' says Mickey!

"Thanks!" to WellFedFred (in this post), who shared the following story from CNBC (click here to read in its entirety) focusing on J.Crew's Mickey Drexler: 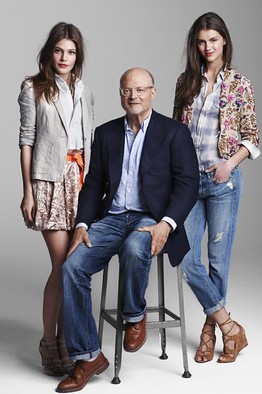 To compete in an industry that J.Crew CEO Millard "Mickey" Drexler said already contains many brands and designers, retailers must guard against overexpansion and growing merely for growth's sake.

Although consumers continue to flock to brands in droves, driving sales at companies such as TJX and Nordstrom, people will stop paying as much money as they are for logos at some point, Drexler said.

“The world today — the standards have been lowered and more people today are wearing more products from every designer, and the dilution of designer names is extraordinarily fast because they’re selling to all discount stores with products and with deals,” Drexler said.

Drexler's comments come two weeks after J.Crew, which went private last year, reported a 21-percent rise in its second-quarter revenue. Still, he is not ensuring that double-digit growth will continue moving forward.

“We never planned to keep double-digit growth up," he said. "We never plan it because then you buy too much inventory, and then you have to take markdowns.” Drexler listed the company's Italian-made shoes, silk shirts and men's Ludlow suits as a few of the items that have been fueling sales.

The company's price range also works well for them, but beating competitors on price is not Drexler's main aim. "I never wanted to compete on price in my history because on price, you don't always win," he said.

Drexler also cautioned retailers against turning to social media as a way to grow their apparel and accessories businesses long term. “I’ve yet to see a correlation in my industry between great social media and great numbers," he said. "You’ve got to be there, but on the other hand, it’s a very hyped-up thing right now.”

Well, J.Crew seems to be embracing social media. In addition to their Facebook, YouTube and Tumblr blog, they are reaching out through other mediums. I have noticed some fashion bloggers getting c/o items from J.Crew. That is in addition to some blog giveaways from J.Crew. Yeah, that is right, from J.Crew. And of course, there is the sponsorship in GOOP.com that was discussed in an earlier post today (click here).

As for too many brands, I see what he is saying. It feels like every celebrity has a fashion label they want to promote.

What are your thoughts on the article? Any points you adamantly agree or disagree with? If you could make some suggestions to J.Crew, what would they be?