The Gap Wanted Mickey Drexler Back {say what?} 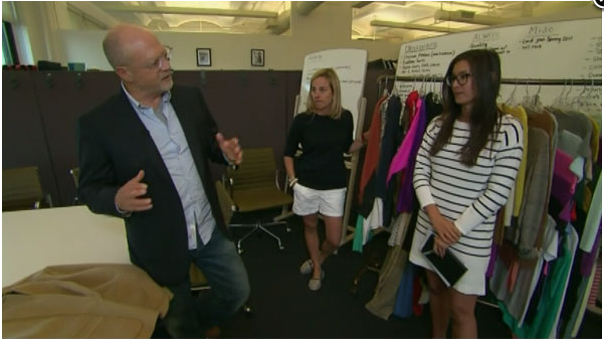 There is an interesting article over at the New York Times (click here to read in its entirety):

A Humbled Gap Tries a Fresh Coat of Pep
By Stephanie Clifford
April 28, 2012

...After defining 1990s khaki culture, Gap fell hard in the early 2000s. Management missteps, executive turnover and, not least, unappealing fashion punished sales. It was a remarkable comedown for a chain that once seemed to dictate how America dressed.

...What went wrong? Dozens of interviews with current and former executives depict a company that chased after rivals, rather than charting its own course, and that cut quality and lost touch with customers. Simply put, it filled its stores with stuff that people didn’t want.

...When Millard S. Drexler arrived as chief executive in the ’80s, Gap began selling its own clothes. Gap Inc. expanded Banana Republic, started Old Navy, and went on to dominate American clothing retailing for almost two decades. But by 2002, breakneck expansion caught up with it. The company was close to bankruptcy, and Paul Pressler, a Disney executive, was brought in as C.E.O.

Yet by then, rivals like Zara and Juicy Couture were challenging Gap’s all-things-to-all-people approach. In 2007, Mr. Pressler stepped down and, according to someone familiar with the matter, a board representative reached out to Mr. Drexler, who by then was running J.Crew. Would he return if Gap bought J.Crew? he was asked. Nothing came of it.

Bill Chandler, a Gap spokesman, says that if this happened, it did not represent the board’s point of view. ...

I found this pretty spectacular considering the Gap fired Mickey Drexler for mishandling their business. I think his relationship with the Gap is best summed up in this excerpt of a Wall Street Journal article (click here for its entirety):

It was Steve Jobs who informed Millard “Mickey” Drexler that he was about to be fired from Gap, a company he had taken from $400 million in annual revenues to $14 billion and from 450 stores to more than 2,000 in the span of 19 years. “Steve, who was on the board, called and told me the night before,” Drexler says, recalling their May 2002 conversation. He knew it was coming. Although he’d been celebrated in the media for years as the “merchant prince”—the man who had the answer to the curious riddle of retail (just how do you get a customer to buy more than one pair of jeans?)—Gap’s growth had stalled in the two and a half years leading up to his firing: Same-store sales had dropped by double digits every quarter between 2000 and 2002 and the stock had plummeted 75 percent.

The board did him a favor; at least that’s how Drexler plays it. “I’d been trying to figure out how to get out from under a job that had suddenly owned me for around four years,” he says over a lunch of chicken parmigiana at Enzo’s Restaurant in his old Bronx neighborhood. That sounds suspiciously like bravado from a jilted CEO. “Yeah,” he acknowledges. “I felt terrible about being fired.” He hasn’t shopped at Gap since. “I still feel angry every time I pass a store.” Every time? “That’s right,” says Drexler. “Every time.”