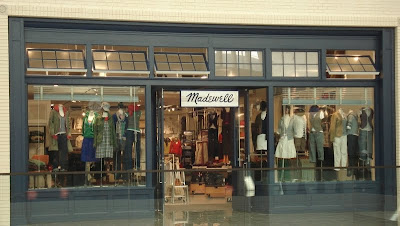 Over at Grazia Daily (click here), it is reported that Madewell will sign on a celebrity to collaborate on a new Madewell line. Also, "thanks!" to Jennifer (in this post) who let us know Fashionologie has an article (click here) on this news.

It seems surprising, doesn’t it? Not that the presenter will be adding the line ‘designer/consultant’ onto her CV, but the fact that it’s taken this long to happen. In Alexa’s own words, that’s because “I was being offered so many collaborations for a long time, but I held off. I thought it would be quite a ‘sellout’ thing to do,” Chung told WWD. Oh she knows how cool she is alright.

Someone else well aware of this fact, is Millard “Mickey” Drexler, chairman and chief executive officer of J. Crew Group. “There is no grand scheme to this, and we still don’t want to hire a celebrity spokesperson,” he explained “It’s just that Alexa is totally cool. It’s not the way she looks or dresses. It’s the way she is.” The story goes that when Drexler consulted his staff about who the brand’s ideal customer was, they all named Chung, partly because they’d served her in the store.

The brand, which is part of US retail giant J-Crew sells hip vintage-inspired pieces to a young customer base, most of their pieces coming in under £100. ‘Alexa Chung for Madewell’ will include polka dot tea dresses, dungaree dresses, high-waisted skinny jeans, oversize wool jackets with velvet and lace accents, and T-shirts. So not a great departure from Alexa’s own dressed-down look (although we’ve seen her in an increasingly grand selection of designer frocks since she arrived in the states).

Alexa is currently concentrating on fashion rather than presenting. She’s modelling for Pepe jeans and has a luscious Mulberry bag named after her. In the past she has also modelled in campaigns for DKNY and New Look too. Famous for her personal style, she has also studied art and graphic design and the collection will include her own drawings and photographs. [WWD]

Madewell has been thinking about incorporating a "stylish face" to the brand for awhile (refer to the October 23rd "Madewell in the News: It's On Its Way" post). It is probably a better move to have a collaboration than a face for the company.

As for Alexa Chung, I thought she was super cute on MTV's It's On With Alexa Chung. Although, I don't know if I would take any fashion advice from her. She is a former model, so she could get away with some crazy, over the top styling. Now that I think about it, she probably could style the next J.Crew catalog! ;)

What are your thoughts on the article? Do you think it is a good marketing move to have a celebrity collaboration for Madewell? Who would you like to see in that role? :)
Posted by Alexis {J.Crew Aficionada} at 6:08 AM