J.Crew News: The Cult Of J.Crew

"Thanks!" to RatsOnParade & SC Crew, who let us know there is an article about J.Crew's customer following over at Forbes (click here to read the article in its entirety). 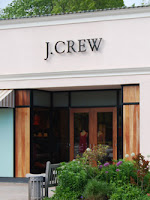 This shouldn't come as a shock: It's a bleak time for retailers. Stores have gone out of business, 70% off sales have become de rigueur and women are shopping in their closets rather than whipping out their credits cards to spend.

But while most retailers have been suffering through this millennium's version of the Great Depression, J.Crew is having its golden era. First Lady Michelle Obama wore J. Crew while gabbing on Jay Leno's couch in 2008 and the first daughters donned Crewcuts, a children's line, to the inauguration. J.Crew's creative director, Jenna Lyons, has taken on fashion icon status comparable to the likes of superstar designers like Donna Karan and Miuccia Prada ("Jenna's picks," which are updated monthly on JCrew.com, often sell out).

And J.Crew's recent success is more than just hype. The company reported 14% revenue growth for the third quarter of 2009 over 2008 and strong holiday sales. The retailer has managed to become fashion's glimmer of hope that women still like to shop, recession be damned. (As if there was any doubt.) ...

J.Crew was founded in 1983 by Arthur Cinader in the hopes of capitalizing on the success of The Official Preppy Handbook and Ralph Lauren. J.Crew was to be the price conscious antidote for the growing legions of yuppie shoppers. Cinader created a glossy catalogue complete with photography that looked like it belonged on the editorial pages of a glossy magazine and which propelled the brand into the spotlight. The company, while initially a runaway success, hit a wall in the late 1990s. Texas Pacific, known for their ability to turn around flailing companies, bought a stake in the company in 1997. The company went through several CEOs before landing on miracle worker Millard "Mickey" Drexler, former CEO of the Gap.

J.Crew quickly morphed into a store that appealed to younger shoppers making investment purchases, Birkin Bag-toting soccer moms cutting back on splurges at Neiman Marcus and career-centric women who can't get enough of the pencil skirts and slim trousers. It's a recession-proof model that few stores imitate--$500 sequin and tulle skirts expertly sit next to their $150 counterparts, with skillfully put together mannequins to help shoppers style the look for evening (with a silk tank) and for the office (with a T-shirt and belted wool sweater). Every purchase seems like a great buy.

Reflecting on J.Crew's recent success, Drexler told investors on a recent conference call: "It's about product, it's about quality, it's about design, it's about service, it's about creativity." Corporate speak, sure, but Drexler knows that his company's success isn't thanks to a celebrity endorsement or the latest wash of jeans. It has to do with consistency. J.Crew's biggest fans wax poetic about J.Crew's reliable sizes, which allow them to shop easily online. They applaud the line's color palette with a range from basic black to trendy lime green. And they love that they can buy everything from a $115 retro one-piece bathing suit to a $2,500 lace wedding gown. ...

The author at Forbes, Leah Bourne, actually contacted me about this article in December. I responded back about being happy to contribute by email (as to not reveal myself). I never heard back from her. What's up Leah, why overlook the J.Crew Aficionada blog? I am a bit bummed out that Ms. Bourne did not think I nor this blog (driven by all the fabulous JCAs), were worth mentioning let alone following up with. {sniffle} Oh well, I am not bitter! Maybe a little bit... ;)

What are your thoughts on the article? Do you agree or disagree with any of the points made?
Posted by Alexis {J.Crew Aficionada} at 3:17 PM