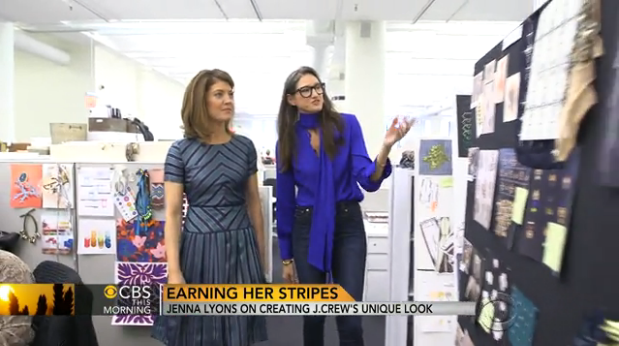 "Thanks!" to many of you, including Molly K., as well as Suzy and GigisGoneShopping (in this post), who let us know that J.Crew's Jenna Lyons was featured on CBS's This Morning last week.

To read the transcript in its entirety, as well as videos, click here.

Jenna Lyons is one of the most influential women in fashion. As creative director at J.Crew, she is credited with giving the brand its unique style, catering to everyone from celebrities to students. But as the company struggles with falling profits and tries to expand abroad, Lyons has her work cut out for her.

She's more than game for a challenge, reports "CBS This Morning" co-host Norah O'Donnell. Walking around with Lyons at the J.Crew office, you might notice one thing about her: she wears five-inch heels.

"I feel like I can see everything better," she said. "I can see over all the aisles, I feel a little bit more glamorous, especially on those days when, you know, I have a lot going on." But at six feet tall, she doesn't have a height complex.

And if Lyons has no aversion to heights, it's because she's scaled a lot of them. As president and creative director at J.Crew, Lyons helped transform a once-homespun mail-order brand into a multi-billion dollar retail powerhouse.

"I always liked being surrounded by pretty things, and sometimes those pretty things looked beautiful next to each other, and sometimes they actually created a strange magic. Those things happen when you come home after a night and you throw off your blazer and all of a sudden it's landing on top of your necklace and it's landing on top of a blouse that you wore the day before. Clearly, I'm very neat," Lyons said, laughing. "And all of a sudden they form something different that you might not have thought about."

Lyons has no problem admitting to the inspiration for her genius; she gets her ideas from the pile of clothes on the floor.

Lyons grew up in California, sewing her own clothes and dog-earing catalogs from her future employer. She moved to New York to attend Parsons School of Design and, after interning at Donna Karan, joined J.Crew in 1990.

"Yeah, it was like that," she said. "I think I sat in a hallway with my computer sort of with an extension cord plugged in."

But she felt much more at home at J.Crew than she did at Donna Karan.

"Having not been sort of like the cool kid in school, and being a little bit of the outcast when I was younger, I remember one of the first couple of times when I felt attractive or beautiful," she recalled. "And I realized that that was important to me, to be able to do that for everyone, not just people who had the ability to write a $2,000 check for a jacket."

She insisted she wasn't the popular kid growing up. "Oh God, not by a long shot," she said. "No, I was unfortunately incredibly tall, oddly skinny."

She also dealt with a personal issue that had other students making fun of her. "I have a genetic disorder called incontinentia pigmenti," she said, "and the result of that means that I had bald spots on my head, which I didn't even know I had until the girls were talking about me behind my back in school."

Lyons faced bullying. "I got beaten up quite a bit... on the way home from school, yes," she admitted. "It's traumatic, but it also, I think, is an opportunity to decide what you wanna do with that. Like, you have two ways to go. You can crawl under a rock, or you can actually decide to do something with it."

Lyons didn't seek out a rock, though she did endure some hard places. Her early career survived a decade of turmoil as J.Crew shuffled its looks and its leadership. It took Mickey Drexler, the so-called "king of retail," named CEO in 2003, to finally define J.Crew's aesthetic and five years later, to charge Lyons with curating it.

People have said that she and Mickey have a very special relationship, drawing comparisons to the relationship between Steve Jobs and Jonathan Ive at Apple.

"I was going with Sonny and Cher, but okay," she said. "There is no question I think he is an inspiration. He gets excited to the same level of excitement he did the first day he walked in here."

In a few seasons, J.Crew clothing went from cloistered and collegiate, to laid-back, grown-up, big-city cool. Its stock surged when first lady Michelle Obama and her daughters wore J.Crew outfits at the 2009 inauguration.

"I do a hula dance when I'm in the airport and someone walks by in a coat, you know?" she said. "When Michelle Obama came out in our outfit, I think the hula dance turned up a notch. And to have the First Lady feel accessible for America? That's really never happened before."

For some, it still hasn't. J.Crew prices do start in the single digits, but can reach well into the hundreds of dollars. There are some sweaters that sell for $98, but others are priced at $800 -- not necessarily the most accessible price.

"We had some of the more expensive pieces in the catalog, that was something that we got feedback on and we have changed," she said. We still have that product, but it's certainly not for everyone."

They've also received feedback on a recent addition to their clothing line. In July, J.Crew suffered criticism for introducing a 000 size. "Interestingly enough, part of that was driven by the fact that we launched a store in Asia, so we opened our first store in Hong Kong, and some of the people that were living there had tried on our double zero and said, 'it's actually not small enough,'" she explained.

They were shocked, and knew they had to change to fit their new customer base. "I think there was some idea that maybe we were doing it for, you know, vanity sizing, which, I mean, absolutely was not the case," Lyon said. "We got a lot of negative feedback; we also got a lot of positive feedback from people who are like, 'No, no, no. It's for me, it's for me. Don't take it away.'"

Beyond Hong Kong, J.Crew also opened in London and, come Spring, will be in Paris. The expansion comes despite a bruising year, in which second-quarter profits fell almost 40 percent.

"I've been incredibly fortunate, I have to say, oddly enough, to have been through this before -- we've had tough quarters before," she said. "We've had tough moments. As much as it's hard to go through, I'm not worried," said Lyon, adding, "We have not peaked."

There is another video about the behind the "behind the scenes" interview:


This is a great segment showcasing Jenna Lyons and her passion for J.Crew.

What are your thoughts on the article and video? Any points that you found very interesting? Please share! :)
Posted by Alexis {J.Crew Aficionada} at 12:30 AM