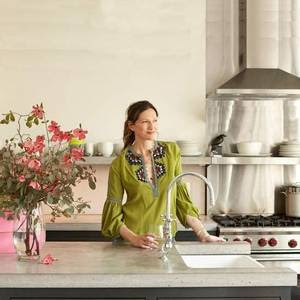 A big "thanks!" to Raina (check out her great blog "If The Lamp Shade Fits") who let us know that J.Crew's Jenna Lyons is featured over at a British interiors magazine called LivingEtc (click here to see all the images of her home).
A rundown Brooklyn Brownstone gets an elegant makeover
By LivingEtc

Jenna Lyons is known in New York as the woman who made American clothing giant J Crew hip. Not surprisingly then, Jenna has used her razor-sharp style intuition to dress her tall, slender 1890s house in Brooklyn, which she and her husband, artist Vincent Mazeau, rescued from devastating neglect. A virtual ruin, the town house had never been wired properly and had a heating system that pumped out toxic fumes. 'The house was a two-year project before it became a home,' explains Jenna. 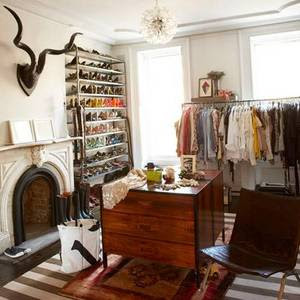 This cool New York couple also fell for the space because it wasn't a fashionable loft. 'In this city, it's very unusual to have a front door and a back garden,' says Jenna. Now the former wreck oozes modern elegance mixed with a touch of faded English country-house grandeur. Jenna has made one dramatic style statement per room.

The couple deliberately chose furniture and decorative details that grow old gracefully and look good with a little mess. In their bedroom, which flows into their en-suite bathroom, the herringbone slate floors mature the more they're walked on and splashed with water. The concrete work surfaces in the kitchen also improve as they take on scratches, scrapes and red-wine spills.

In their search for fixtures and fittings with a history, Jenna and Vincent also tracked down vintage English taps, baths and even toilets. 'Yes, they're used, but in a good way. I treated the taps with a spray bottle full of sea water to make them look old and unpolished. The effect is lived-in and low maintenance.'

Awhile back, Domino did a story on Jenna Lyon's home too (refer to the "Domino Magazine Features J.Crew's Jenna Lyons {part 2}" post from October 27th). My favorite part of these articles is getting to look at her closet/ dressing room space. (The layout looks like a mini retail store –delicious!) It's always neat to spot the J.Crew items she owns! ;)

What are your thoughts on the article & photos? Do you enjoy seeing her living space? How much do you love her closet? ;)
Posted by Alexis {J.Crew Aficionada} at 7:17 AM