J.Crew and Their (Loro Piana) Secret

There is another interesting article over at the WSJ (click here) about J.Crew's sweaters and their secret partnership that's not-so-secret. ;) 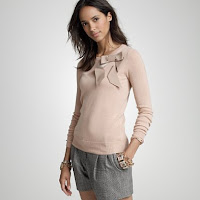 What’s in a Wool? The Secret of Loro Piana
Italian Textile Maker Sells to the Finest Designers— and, Quietly, to J.Crew
By Christina Binkley
August 6, 2009

Operating out of the village of Quarona at the foot of the Italian Alps, the Loro Piana family has been wholesaling textiles for six generations. Famed for its meticulous grading of wools, Loro Piana sells its fabric to high-end manufacturers, tailors and couturiers such as Brioni, Brooks Brothers and Maggie Norris—makers who sell suits for $10,000 and are permitted to sew Loro Piana’s scripted label onto their garments.

“As long as they sell the finished product for a high enough price, they can use our name,” said company co-chairman Pier Luigi Loro Piana over lunch and an Australian sauvignon blanc at the Modern in New York. “They cannot be too cheap because our fabric is always at the top of the line.” The cost of Loro Piana’s own line of conservatively cut clothes—a sweater can cost well over $1,000—reflects the luxury-at-all-costs approach of Mr. Loro Piana and his brother Sergio, who seek out rare wool, cashmere and silk fibers from Australia to the Himalayas.

But consider the online description of another sweater, a cashmere V-neck cardigan that is “spun from supersoft, luxurious Italian cashmere from a world-famous mill in the foothills of Piedmont.” The peddler: catalog purveyor J.Crew. The price: $145. J.Crew’s Web site also notes that for a $298 cardigan, “We used the very finest cashmere—direct from a storied mill in Quarona.”

With that cagey wording, J.Crew refers to an open secret in the textile industry: Loro Piana supplies not just Brioni but also Bloomingdale’s, as well as many other middle-market brands. Some use Loro Piana wool and fabrics openly and some under deepest cover—forbidden by contract to associate their brands with Loro Piana’s luxury image.

J.Crew, for instance, makes its cashmere sweaters—including its Crew Cuts sweaters for children—from Loro Piana yarn. But the company has contracts with the Italian manufacturer that require it to keep mum.

Which it does, sort of, by using everything but the company’s name. “I told them, why don’t they just put in the ZIP Code?” says Pier Guerci, Loro Piana’s president in the U.S., who has brought up the issue with J.Crew’s chairman and chief executive, Mickey Drexler. Mr. Guerci chortles wryly—Mr. Drexler is a friend who recently let him use his home in the Hamptons. “They could have a little map, with an arrow pointing to the factory.”

Yet the back-and-forth begs a serious question for consumers: Is it worth paying for the Loro Piana name? What do you get from two different companies that use the same yarn?

J.Crew is a mass brand with broad middle-class appeal, but Mr. Drexler has been working to upgrade its clothes’ quality. Loro Piana was one of the first new producers he hired in an effort to switch to more luxurious textiles—part of a turnaround he credits with attracting the brand’s highest-profile customer, Michelle Obama. “We focused our efforts on the best in the categories we were in,” he says, referencing J.Crew’s Thomas Mason shirt fabrics among others. He declined to discuss his company’s relationship with Loro Piana. Executives from Bloomingdale’s and Brioni also declined to discuss their relationship with the Italian company.

But a sweater is more than the wool it’s made of. At a time when virtually all Italian textile manufacturers are struggling with a global recession that has exacerbated competition, Loro Piana is trying to differentiate itself by playing up its image of quality and luxury.In its fabrics, it markets innovations such as lightweight wool threads twisted with linen and silk. Loro Piana-branded clothing and accessories now account for about 60% of the company’s revenues, Mr. Loro Piana says.

Mr. Loro Piana speaks with pride of the company’s vertical control—from Mongolian sheep-shearer to Manhattan cardigan. At Loro Piana factories, workers known as menders use tweezers to pick out small impurities from fabric. Only two flaws per 50-meter piece are allowed, below the industry standard of five flaws. “

Anything you manufacture, you can control the quality,” says Mr. Loro Piana, with a brief segue into how wool becomes one micron thinner, and therefore worthless, in a drought. “If you don’t control the manufacturing, you lose something.” But what is it that you lose? To get an idea, I made an informal comparison of a J.Crew sweater and one from the Loro Piana line.

Priced at $1,750—a level at which one expects quite a bit—the gray-ribbed Loro Piana sweater was created at the company’s factories near Quarona. Its tight knit creates a rich texture, and the details—such as working buttons at the cuffs, tightly woven elbows in a contrasting patter and finely finished, sturdy pockets—suggest lasting style without looking trendy. After we bunched up the sleeves, the knit held its shape, the wrinkles quickly falling away. It’s also long enough to double as a dress. Cared for properly, it should last for years.

J.Crew’s white cardigan, priced at $298, was made from Loro Piana yarn that was shipped to a factory in China to be knitted according to J.Crew’s specifications. Its label makes the most of the yarn’s origins, saying “Made in China of Italian Yarn.” The sweater is more stylish in its 80s-influenced boyfriend-style design, but it’s so thin that it’s see-through—which may be intentional, given that it’s billed as 14-gauge “featherweight” wool. (A J.Crew spokeswoman declined to comment on my critique.)

Grosgrain trim inside the placket smartly stabilizes the big shell buttons, but it stops midway up the body, creating an ill-finished, flimsy look at the top. The arms remained wrinkled after being bunched up. It’s fashionable, but not dressy—a wardrobe item that should last a year or two.

What are your thoughts on the article? Disagree or agree with any of the points made? What are your experiences with J.Crew's sweaters? Do you think J.Crew does a good or poor job of advertising their not-s0-secret relationship with Loro Piana?
Posted by Alexis {J.Crew Aficionada} at 7:09 AM