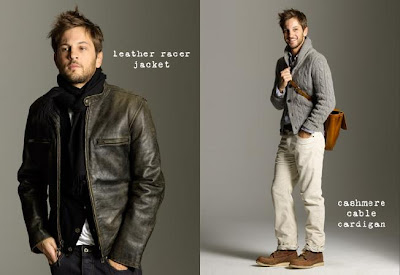 The Look Books for J.Crew that I have seen, were always targeted for women. So I was pleasantly surprised to see at their website a Look Book exclusively for men (click here for link). I think that is fabulous and hope that they decide to print the Look Book as well (if it's not already available in a paper version). I always felt like the men got a little short changed in the catalogs (e.g. not enough pages showcasing men's fashion), so it's nice to see that J.Crew is devoting more pages to them. :)

The Men's Look Book coincides with J.Crew's latest news (that JRL pointed out in the "JCrew's Website is Updated" post,) which is they are opening a "men's only store" in Tribeca, NY (during August of this year). J.Crew is also showcasing "Tribeca Mens Shop" at their website (click here), which has items that will be featured at the men's only shop in NY.

The following are excerpts of an article in DNR about the men's store in NYC (click here to see the article in its entirety):

"J.Crew has found the location for its first men’s-only store. It will be located at The Liquor Store, a landmark building at 235 West Broadway at White Street in Tribeca. It will be smaller and more intimate than the company’s other stores, according to a spokesperson, and is slated to open in the early summer.

It will carry “the best-of-the-best” of the J.Crew men’s collection, including Collector’s Items, its upscale, limited-edition items. It will also offer the company’s “list” of the items that every man should own.

Millard Drexler, CEO of J.Crew, mentioned the planned debut of the men’s-only store during the company’s fourth quarter and year-end conference call on Tuesday. He said the store is “a very short-term lease,” involving “very little investment and risk,” that will allow the company “to fool around and play with a men’s store. It’s going to be small.” Drexler said the company is continuing to work on finding locations for “one or two” larger freestanding men’s stores, but no leases have been found."