J.Crew Suiting for Men: the Reinvention 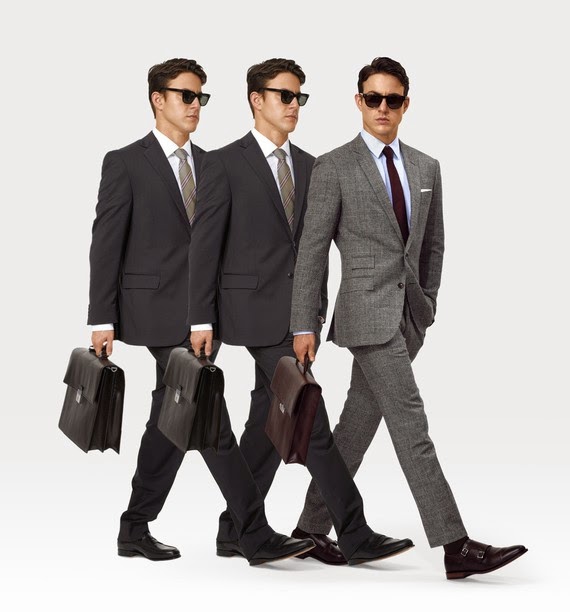 "Thanks!" to J.Crew Guy In Canada who shared the following article from the Wall Street Journal (click here to read in its entirety) with us:

The Reinvention of the Entry-Level Suit
Affordable no longer equals regrettable. Thanks to a suiting revolution led by J. Crew, men without thousands to spend can step out in fashion-forward styles that look like a million
By John Ortved
September 19, 2014

TWO YEARS AGO, Collins Ward, 34, a principal at a Manhattan-based private-equity firm, was looking for a new charcoal-grey suit. Though his closet was stocked with $2,000-plus ensembles from Armani and Ermenegildo Zegna, Mr. Ward headed downtown to J.Crew, where he purchased a jacket ($425) and trousers ($225) from the brand's Ludlow line.

"I've worn a suit every day to work for 10 years, and I tried a lot of the nicer, more expensive Italian brands," said Mr. Ward. "Frankly, [the Ludlow] is a good price point, and has the slimmer fit of the Italian brands."

The starter suit is not what it used to be. A generation ago, a man without a great deal of means—whether he was embarking on his first job or attending his first wedding—had to settle for boxy cuts in rayon and wool-blends from departments stores. But beginning a decade ago and ramping up over the past five years, there has been a veritable revolution in men's suiting priced under $1,000. Brands like J.Crew, Club Monaco and Suitsupply have invested in fine Italian wools, slimmer cuts and refined construction to produce moderately priced suits that offer men something similar to, and occasionally indistinguishable from, their upscale counterparts.

"It's something that we've not only noticed but also celebrated—the democratization of fashion," said Jim Moore, creative director of GQ. "You don't just get kind of a dumb-dumb business suit. It's got all the trappings of a suit that could cost three or four times its price."

Producing the suits "overseas," usually in Asia, keeps those prices moderate. However, these brands teach their factories how to better construct the jackets and trousers. High-end fabrics help. While mills like Loro Piana and those in the Biella region of Northern Italy make textiles for the planet's most expensive brands, they're not above accepting business from a company like J.Crew, which can leverage economies of scale to satisfy a new class of educated consumers.

Those buyers know what a great suit is meant to look like, thanks, in large part, to the Internet. In the past few years, the Web has supplied young men with an ocean of information—from blogs showing the right way to wear a pocket square to street-style shots to slideshows rounding up the dapper Mad Men of Sterling Cooper & Partners. "I cannot stress the importance of what the street-style bloggers have done," said Eric Jennings, director of menswear at Saks Fifth Avenue. "Having these images at your fingertips 24/7, you can see how it's put together. I think it's inspired a lot of Americans guys."

If there's a Lenin of this revolution, it's J.Crew, which introduced its Ludlow in 2008. Four years later, the brand dedicated an entire store to the suit in downtown New York. The Ludlow range has expanded from three initial offerings to a line of tuxedos, cotton summer suits, and offshoots, like the Traveler, made with three-ply wool meant to better hold its shape, and the Crosby, made for more athletic builds. "It took about two years to get the shape and details right. It has all the inner facings of a bespoke suit," said head of J.Crew menswear Frank Muytjens of the Ludlow development process. The suit also features a high armhole, narrow lapel, slim waist, a soft shoulder and a slightly shorter body length. These attributes are common across the new under-$1,000 suiting landscape, as is the selling of pants and jackets as separates.

For fabrics, Mr. Muytjens looked to storied mills around the world, from Abraham Moon & Sons in England to Larusmiani in Italy. As the line became more popular, he added corduroys, Irish linens and English tweeds. "[J.Crew] hit that sweet spot that men crave—a go-to suit that fits them, but also changes a bit every season in its fabrication," said Mr. Moore.

While J.Crew may have struck while the iron was hot, there was a key precursor. Mr. Moore cited Calvin Klein's introduction of its White Label line a decade ago as a pivotal factor... "Over the last 10 years, that mainstream guy has not only moved with fashion, he's also moved with elevation of fabrics."

...In 2012, he noticed guys without $2,500 to spend wanting a similar type of suiting, and began developing the Freeman, a hand-tailored, fully canvased suit—made in America starting at $1,100. "The Ludlow Suit is imported," said Mr. Kilroe. "Generally, when a brand doesn't specify where a suit is made, it's because they don't want the customer to know.

..."Guys don't trade down," he said. "Even during the recession, if they were buying Armani, they didn't trade down. They just waited. When they're at a certain level, they like to stay there. It's their pride."

J.Crew's suits for Men are amazing. One of my local J.Crew stores carries them, and one can tell the quality and fit are there.

The comment that stood out for me: "[J. Crew] hit that sweet spot that men crave—a go-to suit that fits them, but also changes a bit every season in its fabrication". This is why I think the men's side of J.Crew keeps knocking it out of the park, season after season.

Honestly, I would love Frank Muytjens to guest design a capsule collection for the women's side of J.Crew. Who is with me! ;)

What are your thoughts on J.Crew's suits for men? Any points of the article resonate with you? If so, please share!
Posted by Alexis {J.Crew Aficionada} at 12:15 AM