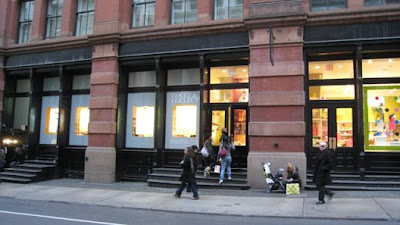 A big "thanks!" to Tweedybird who let us know about some {great} J.Crew news over at WWD (click here). Tweedybird also shared the entire article as well as the following interior shot of the store (also from WWD's article) for us to view. (The exterior image comes from Racked, click here for the original article.) 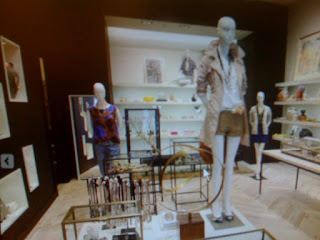 Six days ago, a 500-square-foot space for the brand’s array of accessories, ranging from $7.50 hair clips to $298 Italian leather hobos, opened in the existing J.Crew store at 99 Prince Street. While the store leads easily into the adjacent 2,600-square-foot women’s floor, it feels more like a stand-alone than a shop-in-shop, having a separate entrance, windows and decor. The look is modern, with washed herringbone oak floors and vitrines inset in the walls, balanced by vintage elements like brass jewelry cases and a chandelier.

It’s an appeal based on spirited design and reasonable pricing. “The relative value is pretty compelling,” said Millard “Mickey” Drexler, J.Crew Group’s chairman and chief executive. “I think if a customer can find something that’s relatively well priced and under a certain price, and it’s fun, he or she will buy it.”

Asked to characterize the clientele, Drexler replied, “It’s the same customers shopping the designer stores.” They’re looking to spend less for products with style and of similar quality, he added. “The accessories can go with anyone’s apparel, but frankly we would rather have women wear it with our apparel.”

Among the bestsellers so far: strappy snakeskin and suede sandals, priced $298; leather ballet flats with neon trim, $148; chandelier-style earrings, $75, and antique bracelets with grosgrain bows, $95. “There are not a lot of places that have this level of detail at this price point,” Drexler observed. The shoes and leather bags are all made in Italian factories utilized by designers, and there is a smattering of non-J.Crew product, including a few Rolex watches, priced $2,800 with custom painted dials and Hugo Marie Bib necklaces.

The format is a takeoff of the much smaller “shoe salon” in the J.Crew Collection store at 1035 Madison Avenue. The salon displays some jewelry and handbags, as well as shoes, but without the breadth of product seen in SoHo. J.Crew plans a third accessories shop inside its East Hampton store, though the format is not necessarily a rollout strategy. “Not at all,” Drexler said, when the question was raised. “Right now, we are just thinking that we are loving the feel of it. Customers love our accessories. Nothing is terribly scientific for us. We debated what to use this room for. Probably, it makes the most sense for accessories. It shows off the merchandise more effectively than other stores. Usually accessories, by virtue of [requiring] little space, should be more productive than other categories.”

He also nixed the notion that freestanding accessory shops, independent of a J.Crew apparel store, could one day open. “We’re not thinking separate stores,” Drexler said. “Why have a customer walk to another store? We will always integrate accessories with apparel.”

The accessories shop was previously housed by Crewcuts, which has been relocated to the back half of the 2,400-square-foot lower level, where there was previously men’s wear. J.Crew now operates a men’s store nearby at 484 Broadway, as well as the Liquor men’s store at 235 West Broadway. By removing men’s from the Prince Street store, the children’s, women’s and accessories collections could be better displayed.

The changes on Prince Street also reflect J.Crew’s perpetual fine-tuning, whether it involves fashion or store formats, and its willingness to change and grow while having to work hard to manage inventories during the downturn. In the past few years, the company has launched stores for Crewcuts, men’s wear and Collection. Jewelry was launched in 13 stores in fall 2007, and by holiday 2008 was in all 206 J.Crew retail stores. The company is also beefing up its footwear and accessories catalogue, with the September edition to include an exclusive collection of Italian leather handbags including the Gallery and Minaudière Collections.

As far as the new accessories format in SoHo, J.Crew expects to quickly learn whether it’s working. “After a week or two or three, we should have a pretty good feel,” Drexler said.

This is very exciting news! :) The interior image looks quite lovely. This definitely seems like a great store to visit if one's in the area.

The location for this store is:
99 Prince St
(between Greene St & Mercer St; SoHo Neighborhood)
New York, NY 10012
(212) 966-2739
What are your thoughts on J.Crew's new Accessories store? Do you think this concept-store should be duplicated in other cities? Would you visit (or are planning to visit) this store soon?
Posted by Alexis {J.Crew Aficionada} at 11:04 AM