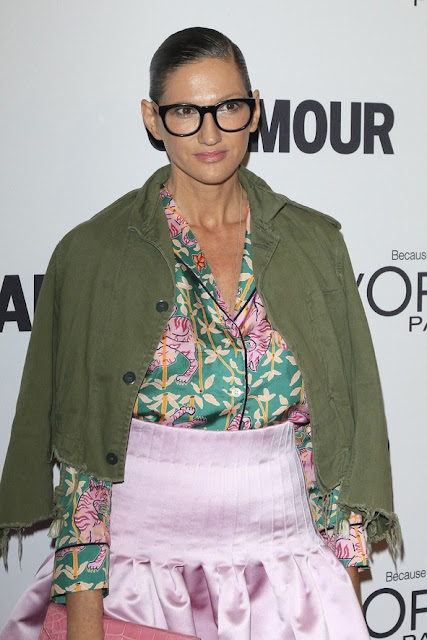 "Thanks!" to many of you, including Roamestudios, who shared the following article from the Business of Fashion (click here).

BoF has learned that the specialty retailer's longtime creative mastermind is departing the company. Current J.Crew women's head Somsack Sikhounmuong will take over her design duties.

J.Crew’s Jenna Lyons is exiting the company after 26 years with the specialty retailer, BoF has learned.

"Jenna and I got together and we both agreed it was time for a change,” J.Crew chief executive Millard "Mickey" Drexler told BoF in an exclusive interview. "That being said, she’s got plans to do other things. It’s been a great run. There’s a lot of mutual respect between Jenna and me.”

“It has been beyond my wildest dreams to work with such an amazing team of people at such an incredible brand and alongside Mickey — one of retail’s most talented visionaries,” Lyons said in a statement. "I am excited about the next chapter for J.Crew as well as the opportunity for other creative leaders within the organisation to step up and take on new responsibilities. Having spent the better part of my life with J.Crew, I feel an immense pride and love for everyone at the company.”

Current J.Crew women’s head of design Somsack Sikhounmuong — who previously led sister label Madewell’s design and has been with the company since 2001 — will be promoted to chief design officer, overseeing the women’s, men’s and children's design teams effective immediately. All other creative departments that were reporting to Lyons — who was also president of the company — will now report to Drexler.

"Somsack and our design teams have a deep understanding of the aesthetic and style our customers rely on us to deliver, with a proven track record of driving creative vision in-line with our brand DNA,” Drexler said. "We are excited to extend Somsack’s vision across all design categories and look forward to the team’s contributions. As always, delivering the very best product, value and brand experience across channels is our top priority.”

Lyons joined J.Crew in 1990, although her role was elevated after Drexler came on board in 2003. Through their unique partnership, they managed to transform J.Crew into a cultural phenomenon, transforming the way a generation of American men and women dress with Lyons' energised, tongue-in-cheek take on classic preppy tropes. Her candy-coloured designs — from the now-classic "Bubble" necklace to the "No. 2" pencil skirt — impressed themselves on current fashion in a way rarely seen at the mass level. In 2010, Drexler promoted her to president, reflecting her influence in design and at the company.

At the same time, Lyons became something of a cultural icon in her own right, whose personal style — statement eyewear, oversize suiting, sequins for day — became copied the world over. Just this past Friday, Lyons was captured on J.Crew’s Instagram handle celebrating the retailer’s self-made holiday, National Stripes Day.

However, some say that Lyons' role had transitioned out of day-to-day design duties and more into a face for the brand. But like many specialty retailers, J.Crew has been squeezed by discount culture, the casualisation of dress and the consumer's penchant for fast fashion, which relies less on one well-defined aesthetic and more on moving trends quickly to the market. In its 2016 fiscal year, net sales at J.Crew were $2 billion, down 6 percent from the year previous. Sales at stores open at least one year were down 8 percent. Turnaround efforts — including a marked return to the preppy “basics” that performed so well in the past and diversification into athleisure with a multi-season collaboration with New Balance — have yet to move the needle.

The company’s top line has been somewhat boosted by the growth of Madewell, which saw net sales in 2016 increase 14 percent to $341.6 million, with comparable sales up 5 percent. But its debt — which totalled $1.5 billion, net of discount and deferred financing costs, at the end of last year — has proven an albatross, as it becomes current in 2018. J.Crew also has a $350 million revolving loan. The retailer has reportedly considered debt restructuring.

Lyons' post-J.Crew plans are not yet known, but the indelible mark she has made in defining American fashion for the past decade cannot go unacknowledged. As for J.Crew, this announcement is expected to be the first in a series of strategic changes that will allow it to perform in its next iteration.


Wow. I always thought she was being groomed to take over for Mickey Drexler when he decided to leave. So its interesting that is not happening. More interesting is whether or not it was her decision to leave...

Honestly, Jenna Lyons taste had evolved away from J.Crew's core style for many years now. While she was taking fashion forward risks, J.Crew's core customers were not. "Basics with a twist" is J.Crew's true mantra and not Jenna Lyons.

I am, of course, interested to see with Jenna's next move is. Whether she will be scooped up by another retailer or start her own line. Time will tell! ;)

Thoughts on the article? Disagree or agree with Ms. Lyon's leaving J.Crew?
Posted by Alexis {J.Crew Aficionada} at 4:20 PM