Do You Still Heart J.Crew? 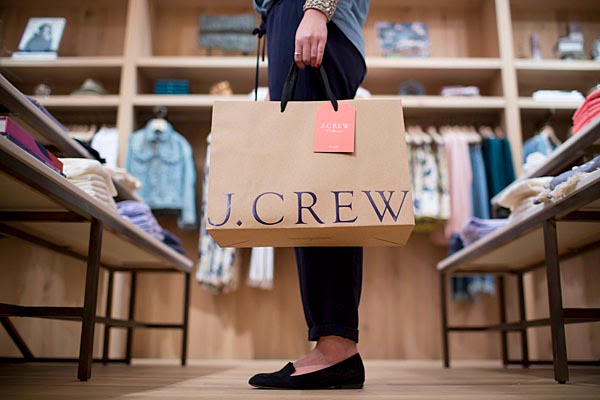 
Sorry, J.Crew. Female shoppers just aren’t that into you.
By Sarah Halzack
March 23, 2015

It wasn’t long ago that J.Crew was the envy of the retail industry. Its distinctive look — well-made basics bedecked with a splash of sequins or a door-knocker-sized necklace — stood out from less adventurous retailers in the same price range and helped the brand triple its revenue between 2003 and 2013.

And yet 2014 marked a turn in fortunes for the retailer. The company recently reported that sales at its stores open more than a year fell 2 percent in 2014. In the crucial holiday quarter, the brand’s financial picture was especially cloudy, with revenue decreasing slightly to $620.7 million and comparable sales sliding 5 percent.

In a rare appearance on a conference call with analysts, chief executive Mickey Drexler offered several reasons for what he called “a tough year” for his company, including a decline in mall traffic, intense competition and shoppers’ fixation on promotional prices.

And yet the biggest problem of all, Drexler said, was one of J.Crew’s own making: It filled its stores with clothes that women really just weren’t into. “We’ve made some mistakes,” Drexler said, including “missteps in our iconic classics.”

Drexler said the women’s business has been “challenging” recently and that the fits, silhouettes and color palette of the clothes simply haven’t connected with shoppers the way they had in the past.

J.Crew says it is aggressively trying to win customers back with fresh colors, classic designs and a more diverse merchandise assortment, particularly in the pants category. (As Drexler said, if you weren’t buying their skinny-cut Pixie or Minnie pants last year, you probably weren’t buying women’s pants from them at all.)

J.Crew is learning the hard way that in an era when e-commerce has presented women with ever-greater shopping choices, customer loyalty is hard to win and incredibly easy to lose. And with its middle-of-the-road price point, the typical J.Crew shopper might be just as likely to invest in a $595 shift dress at Tory Burch as she is to impulse-buy a $8.90 crop top at Forever 21.

With that kind of breadth of competition, J.Crew is betting that the way to get ahead of the pack is not with new marketing tactics or store designs, but to simply make better, more appealing clothes.

J.Crew is not the only specialty retailer that is grappling with a style problem. Gap has lately had similar struggle, with sales stumbling hard as critics say its sportswear has veered from classic and simple to just plain boring. ...

Gap’s sister brand, Banana Republic, appears to be coming out of a style rut under its new creative director, Marissa Webb, who impressed critics and analysts with fall and winter collections featuring trendy and edgy details....

The recent weakness at J.Crew comes after a long stretch in which the brand was flying high. Many attribute its recent success to its top leaders, including Drexler, the chief executive...

And then there is Jenna Lyons, the creative director who has earned the kind of cultlike adoration that is typically reserved for haute couture designers. She’s responsible for the unique, preppy-with-a-twist aesthetic of the clothes, and she is a walking billboard for how to wear them. Photos of her regularly ping-pong around fashion blogs and Instagram feeds, often featuring her in thick-rimmed, geek-chic glasses and some sort of formal-meets-casual ensemble — maybe a structured blazer atop ripped jeans or sequined harem pants paired with a striped T-shirt.

The growth and buzz that Drexler and Lyons created led to whispers about an initial public offering for the privately-held company. But amid last year’s slowdown, that talk has died down.

Reviving the women’s business isn’t J.Crew’s only hope for improvement. The company also includes Madewell, a newer, casual-cool chain which had a much stronger year than J.Crew.

Madewell — a destination for distressed denim, suede ankle booties, and vintage-looking button-downs — had a 14 percent sales increase in 2014 at stores open more than year, growth that is vastly better than what was seen at most specialty apparel retailers. It appears that Drexler sees Madewell as something of a pet project and that he is intensely focused on making it the next big thing in American casual apparel.

The company is also rapidly growing its lower-priced Factory outlet business, with plans to add 21 more of these stores in 2015. And it is cautiously expanding the presence of the J. Crew brand overseas, with a Paris store in the chic Marais district and plans to grow its footprint in Britain and Hong Kong.

But even if these other strategies help make up for slowness in J. Crew’s women’s business, the company remains determined to win back its core female shopper. “She is loyal as hell until we go wrong,” Drexler said.

So many interesting points being made throughout this article (of which I highlighted). The most important is that *finally* J.Crew recognizes that it's important to make their customers happy.
If I sound pretty harsh, it is because for awhile it felt like J.Crew was catering to the fashion editors and fashionistas from Fashion Week more than the base of loyal aficionadas.

It is fine to mix in high-end, fashion forward pieces for the Collection line, which is what it is meant for. However, J.Crew started to make some questionable moves with their regular collection like when they retired the classic Cece Ballet Flat (which they had to bring back!) from their offerings. No matter how many back-to-back sales and promotions, items were not selling. You had to start wondering who was making the bad calls at J.Crew. More importantly, why were they not being fired.

It is clear from Mickey's comments that he recognizes they have gone too far. The question is can they fix it? I think they can. Get the right mix of product that customers, their base of customers, really want, and you will see sales rise. Just look at the Chateau Coat- that was one item they got right during the Holiday season. It never went on sale and it keeps selling out! But as for the rest of the Holiday offerings? Meh. The color palette was drab. The styles were over-sized. Bring back the rich hues! Bring back the tailored tops!

Lastly, I find it interesting that Madewell performed so well. I am a Madewell Aficionada as well and I can see that the quality and fit are in those pieces. I hope Mickey pays a bit more attention to J.Crew to make sure J.Crew sees a rise and in their quality and fit.

What are your thoughts on this article? Any points you found interesting? Anything you agreed or disagreed with?